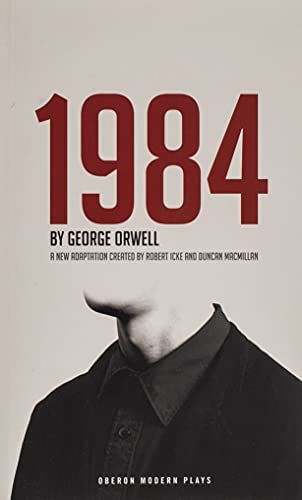 The definitive book of the 20th century is re-examined in this radical new staging by Headlong, the country's most exciting touring company (Telegraph), who brought us Romeo & Juliet in 2012, directed by Robert Icke. April, 1984. 13:00. Comrade 6079, Winston Smith, thinks a thought, starts a diary, and falls in love. But Big Brother is watching him and the door to Room 101 can swing open in the blink of an eye. This major new production explores the world inside Winston Smith s head, as well as the world without, and catches the euphoria and bliss buried deep underneath the cold face of Big Brother. In an age of mass surveillance, total policing and GPS tracking, Nineteen Eighty-Four is as relevant now as it ever has been. A new adaptation created by Robert Icke and Duncan Macmillan. Note: This book is Oberon Modern Plays.

This is a staging that reconsiders a classic with such steely power that it chills brain, blood and bone. Five Stars. --The Times

[A] pitilessly brilliant retelling of the doomed love affair between Winston and Julia. Five Stars. --Guardian

Duncan Macmillan is an award-winning writer whose plays include Lungs, Every Brilliant Thing and 2071. His play People, Places and Things transferred from the National Theatre to the West End in 2016.

Robert Icke is an award-winning writer and director. He is currently Associate Director of the Almeida, where his work includes adapting and directing the multi-award-winning Oresteia (also West End), Mary Stuart, Uncle Vanya, and, with Duncan Macmillan, adapting and directing the smash-hit 1984, which has toured the world, played three seasons in the West End and won several major awards.

Book Description Bloomsbury Publishing PLC, United Kingdom, 2014. Paperback. Condition: New. Reprint. Language: English. Brand new Book. April, 1984. Winston Smith thinks a thought, starts a diary, and falls in love. But Big Brother is watching him, and the door to Room 101 can swing open in the blink of an eye.Its ideas have become our ideas, and Orwell's fiction is often said to be our reality. The definitive book of the 20th century is re-examined in a radical new adaptation exploring why Orwell's vision of the future is as relevant as ever. Seller Inventory # AA79781783190614