Items related to Cosmos: The Infographic Book of Space

Cosmos: The Infographic Book of Space 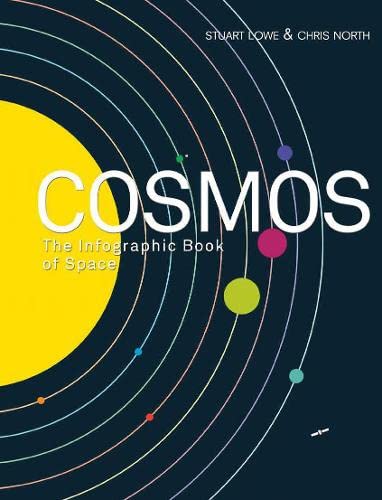 Life. The Universe. Everything. The human race has always revealed an insatiable hunger to search "to infinity and beyond". In this truly mind-blowing book, partners in science Stuart Lowe and Chris North use cutting edge infographics to illuminate - in a new and unique way - the most amazing places and objects that modern science has laid bare. Featuring innovative, inspirational and original designs by leading authors in their field, COSMOS: THE INFOGRAPHIC BOOK OF SPACE delves into a truly international subject and will appeal to stargazers and space enthusiasts of all ages.

Including the Big Bang itself, COSMOS: THE INFOGRAPHIC BOOK OF SPACE:

Explores the secret lives of galaxies and stars

Examines the thousand new planets now discovered beyond the Solar System, checking out their viability for alien life

Chronicles the incredible instruments and machines that are discovering the hidden secrets of the Universe, from 'telescopes' atop the highest mountains to robotic explorers on distant worlds...

Investigates the astounding technology used by human and robotic explorers as they push out beyond the Moon to Mars - and on towards the stars...

"Astronomers Stuart Lowe and Chris North really lift off in this graphic exploration of all things space. Their depictions of year-by-year spaceflights and space junk shock through sheer numbers, while their takes on interplanetary missions, moons in the Solar System and particularly the polarization of the Milky Way €” like a cosmic finger-painting in palest mauve €” deliver the facts with aesthetic brio."

DR STUART LOWE has previously worked at Jodrell Bank Observatory where he helped build astronomical instruments used on radio telescopes in the UK and Poland. At the University of Manchester, he worked on the European Space Agency's Planck satellite, which was launched in 2009 to look at the echoes of the Big Bang. He co-founded the UK's longest running, regular, astronomy podcast - The Jodcast. More recently he has built web-interfaces that allow everyone, from professional astronomers to school children, to observe with the Las Cumbres Observatory Global Telescope network.

DR CHRIS NORTH is an astrophysicist at Cardiff University. Having worked on a number of experiments and space missions, he is currently part of the Herschel Space Observatory team, looking at far-infrared light from star forming in our galaxy and across the Universe. As well as research, Chris is heavily involved in outreach engagement at Cardiff, speaking to teachers, schools, and anyone else who'll listen about space and astronomy. He has made regular appearances on BBC Sky at Night for a number of years.
Chris and Stuart first met whilst working on the Planck satellite. This led to the development of the popular chromoscope.net project, which allowed people to view the Universe in a whole new light. Their partnership has included websites that enable people to track the lifecycle of stars, design their very own space telescope, and even play with the properties of the cosmos. They can often be found looking for new ways to help people understand the Universe we live in.

1. Cosmos: The Infographic Book of Space (Paperback or Softback)

2. Cosmos: The Infographic Book of Space

3. COSMOS: THE INFOGRAPHIC BOOK OF

4. COSMOS: THE INFOGRAPHIC BOOK OF

5. COSMOS: THE INFOGRAPHIC BOOK OF

6. COSMOS: THE INFOGRAPHIC BOOK OF

7. COSMOS: THE INFOGRAPHIC BOOK OF

8. COSMOS: THE INFOGRAPHIC BOOK OF

9. Cosmos: the Infographic Book of Space

10. Cosmos: The Infographic Book of Space