Items related to Scattered Ghosts: One Family's Survival Through...

Scattered Ghosts: One Family's Survival Through War, Holocaust and Revolution 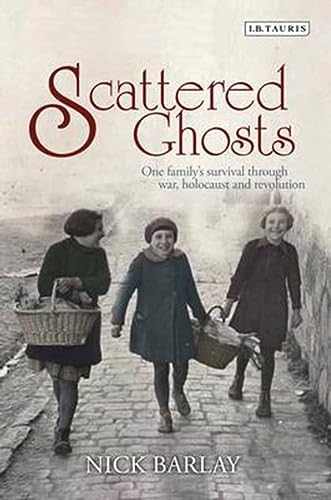 When two Hungarian Jewish refugees landed by accident in Britain in the winter of 1956, they had little idea what the future would hold. But they carried with them the traces of their turbulent past, just enough to provide the clues to their past.

Resurrecting 200 years of wars and revolutions, from the Austro-Hungarian Empire via two totalitarianisms to contemporary Britain, and through the remnants of family possessions and old memories, Nick Barlay retraces the footsteps of the vanished. There is the death march of a grandfather, the military manoeuvres of a great uncle, the final weeks and moments of a great grandmother deported to Auschwitz, two boys survival of an untold massacre and codenamed spies operating in Cold War Britain. Scattered Ghosts is the poignant, powerful story of an all but disappeared world, told through the extraordinary experiences of a single family ruptured by great forces and occasionally brought together by cherry strudel.

'Between fact and fiction, archival research and genealogy, Nick Barlay re-enacts the torments of Hungarian Jewish history from the Holocaust to 1956 and to exile in London, where he was born to refugee parents. He takes us to the margins and the cracks, the streets, the houses and the cellars. His tale is an astonishing tour de force, it is a memorial to the unsung heroes through the prism of his family: compelling and informative, deeply moving and scrupulously understated.' (Irène Heidelberger-Leonard, author of The Philosopher of Auschwitz)

'...an intriguing and moving narrative... his account of the fortunes of his large family - embedded in the fortunes of Hungarian Jewry in the most disastrous period of its history - comes across powerfully and convincingly.' (Ladislaus Löb, Emeritus Professor of German, University of Sussex and author of Dealing with Satan: Rezs Kasztner s Daring Rescue Mission)

'Is it family history? It is. Is it poetry? It is that,too - charming poetry. But clouds soon darken the scene. There's the smell of blood and the tumult of Arrow Cross pogroms. What binds these family fates together is fine writing - and Hungarian cherry strudel.' --(Peter Fraenkel, author of No Fixed Abode: A Jewish Odyssey to Africa)

'...a remarkable family memoir, with the modern history of Hungary cleverly woven into the narratives of individuals.' (Jewish Renaissance Magazine)

'With personal observations, vivid detail and glimpses of hope and humanity, [Scattered Ghosts] is a brave act of defiance against the Nazis' attempt to silence and dehumanise their victims.' --(The Lady)

Nick Barlay is the author of four acclaimed novels and was named as one of Granta s 20 best young British novelists in 2003, until it was discovered he was too old to be young. Born in London to Hungarian Jewish refugee parents, he has also written award-winning radio plays, short stories and wide-ranging journalism.