Items related to A Visit From the Goon Squad

Jennifer Egan A Visit From the Goon Squad

A Visit From the Goon Squad 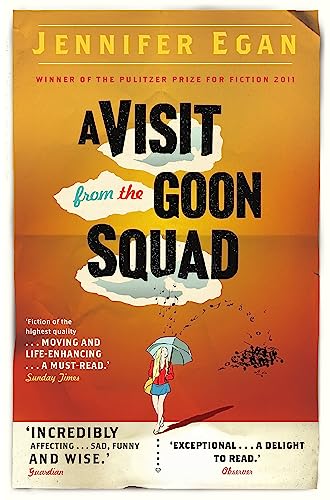 Jennifer Egan’s spellbinding novel circles the lives of Bennie Salazar, an aging former punk rocker and record executive, and Sasha, the passionate, troubled young woman he employs. Although Bennie and Sasha never discover each other’s pasts, the reader does, in intimate detail, along with the secret lives of a host of other characters whose paths intersect with theirs, over many years, in locales as varied as New York, San Francisco, Naples, and Africa. We first meet Sasha in her mid-thirties, on her therapist’s couch in New York City, confronting her longstanding compulsion to steal. Later, we learn the genesis of her turmoil when we see her as the child of a violent marriage, then a runaway living in Naples, then as a college student trying to avert the suicidal impulses of her best friend. We meet Bennie Salazar at the melancholy nadir of his adult life—divorced, struggling to connect with his nine-year-old son, listening to a washed up band in the basement of a suburban house—and then revisit him in 1979, at the height of his youth, shy and tender, reveling in San Francisco’s punk scene as he discovers his ardor for rock and roll and his gift for spotting talent. We learn what became of his high school gang—who thrived and who faltered—and we encounter Lou Kline, Bennie’s catastrophically careless mentor, along with the lovers and children left behind in the wake of Lou’s far flung sexual conquests and meteoric rise and fall. A Visit from the Goon Squad is a book about the interplay of time and music, about survival, about the stirrings and transformations set inexorably in motion by even the most passing conjunction of our fates. In a breathtaking array of styles and tones ranging from tragedy to satire to Powerpoint, Egan captures the undertow of self-destruction that we all must either master or succumb to; the basic human hunger for redemption; and the universal tendency to reach for both—and escape the merciless progress of time—in the transporting realms of art and music. Sly, startling, exhilarating work from one of our boldest writers.

Thriftily evokes many disparate American lives in less than 300 pages, vividly showing how the virtues of the realist tradition historical depth and strong point of view can be combined with a modernist aesthetic of fragmentation and dissolution. --The Guardian

Egan s writing is remarkable for its ability to anchor postmodern trickery to more reassuringly solid novelistic virtues ... Goon Squad hangs together with the airiness of a mobile, constructed to catch the slightest gusts of longing and lust. -- The Sunday Times

Is there anything Egan can t do? Remarkable... Darkly, rippingly funny... Pitch perfect.--New York Times Book Review Best Books of 2010

It may be the smartest book you can get your hands on this summer--The Los Angeles Times.

Truly magical... A Visit from the Goon Squad is a new classic of American fiction. Time Magazine, Best Books of 2010.

If Jennifer Egan is our reward for living through the self-conscious gimmicks and ironic claptrap of postmodernism, then it was all worthwhile. . . . A deeply humane story about growing up and growing old in a culture corroded by technology and marketing. . . . [A] triumph of technical bravado and tender sympathy. . . . Here, in ways that surprise and delight again, she transcends slick boomer nostalgia and offers a testament to the redemptive power of raw emotion in an age of synthetic sound and glossy avatars. Turn up the music, skip the college reunion and curl up with The Goon Squad instead. The Washington Post.

A Visit from the Goon Squad [is] an exhilarating, big-hearted, three-headed beast of a story. . . . [A] genius as a writer. . . . We see ourselves in all of Egan s characters because their stories of heartbreak and redemption seem so real they could be our own, regardless of the soundtrack. Such is the stuff great novels are made of. Marie-Claire

[Egan is] a boldly intellectual writer who is not afraid to apply her equally powerful intuitive skills to her ambitious projects. . . . While it s a time-trekking, tech-freakin doozie, the characters lives and fates claim the story first and foremost, and we are pulled right in. . . . Brilliantly structured, with storylike chapters. Elle.

Jennifer Egan is a rare bird: an experimental writer with a deep commitment to character, whose fiction is at once intellectually stimulating and moving. . . . It s a tricky book, but in the best way. When I got to the end, I wanted to start from the top again immediately, both to revisit the characters and to understand better how the pieces fit together. Like a masterful album, this one demands a replay. The San Francisco Chronicle.

Clever. Edgy. Groundbreaking. . . . For all of its cool, languid, arched-eyebrow sophistication that s the part that will make you think Didion and for all of the glitteringly gorgeous sentences that flit through its pages like exotic fish that s the DeLillo part the novel is actually a sturdy, robust, old-fashioned affair. It features characters about whom you come to care deeply as you watch them doing things they shouldn't, acting gloriously, infuriatingly human. --The Chicago Tribune

Winner of the Pultizer Prize. A brilliantly entertaining novel about memory, time, art and how humans connect at every level.

1. A Visit From the Goon Squad (Paperback)

Book Description Constable & Robinson, 2011. Paperback. Condition: New. Paperback. Jennifer Egan's spellbinding novel circles the lives of Bennie Salazar, an aging former punk rocker and record executive, and Sasha, the passionate, troubled young woman he employs. Althou.Shipping may be from multiple locations in the US or from the UK, depending on stock availability. 368 pages. 0.300. Seller Inventory # 9781780330969

2. A Visit from the Goon Squad

3. A Visit from the Goon Squad

4. A Visit from the Goon Squad

5. A Visit From the Goon Squad

6. A Visit From the Goon Squad

7. A Visit From the Goon Squad

8. A Visit From the Goon Squad

9. A Visit From the Goon Squad

10. A Visit From the Goon Squad