Items related to The Christian & Witchcraft: Dealing with Demonic,...

Avila, Charlie The Christian & Witchcraft: Dealing with Demonic, Satanic, and Occultic Darkness Through the Power of God

The Christian & Witchcraft: Dealing with Demonic, Satanic, and Occultic Darkness Through the Power of God 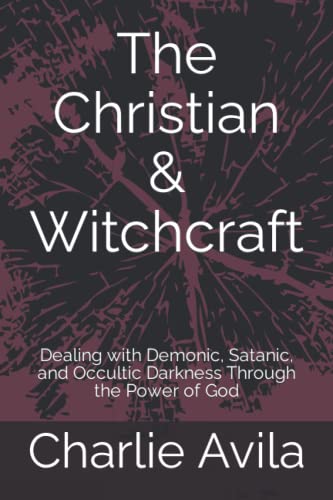 1. The Christian & Witchcraft: Dealing with Demonic, Satanic, and Occultic Darkness Through the Power of God (Paperback)

Book Description Independently Published, United States, 2020. Paperback. Condition: New. Language: English. Brand new Book. I am amazed at how often God's people in the Bible had to confront witchcraft.Moses and Aaron confronted the "wise men, sorcerers, and magicians" of Egypt in Pharaoh's court in Exodus 7-10; "Balaam the soothsayer" was hired to curse Israel, but later seduced them sexually in Numbers 22-25; King Saul foolishly consulted "a witch at Endor" in 1 Samuel 28; the prophet Daniel dealt with "magicians, astrologers, sorcerers, and Chaldeans" in Babylon in Daniel 1-5; both King Ahaz and King Manasseh "practiced soothsaying, used witchcraft, and consulted spiritists and mediums."The Old Testament (OT) uses sixteen different Hebrew words for "wizards," "mediums," "spiritists," "psychics," "necromancers," "sorcerers," "enchanters," "witches," "soothsayers," "diviners," "magicians," "astrologers," "observer of times," and those with "familiar spirits." The New Testament (NT) has nine similar words. The Bible says a lot about these servants of Satan.However, make no mistake about it - God really hates witchcraft. He detests it because He knows how it will destroy our lives. The Lord calls witchcraft "an abomination," "rebellion," "evil," and a "work of the flesh." The prophet Samuel made the famous declaration that "rebellion is as the sin of witchcraft." It really "provokes the Lord to anger." Under OT law, anyone who was a witch, sorceress, medium, or spiritist was not permitted to live - "they shall surely be put to death; you shall stone them with stones." God Himself said, "I will set My face against that person and cut him off from his people" because he has "prostituted" and "defiled" himself. In the NT, "sorcerers" will be thrown into "the lake of fire" because they have "deceived all the nations" and "not repented of their sorceries." Again, God's Word says a lot about this subject.In this first section, I want to look closely at the four instances in the Book of Acts where the early apostles confronted witchcraft in various forms. It may startle Christians to know that the apostle Peter had to rebuke "Simon the sorcerer" in Acts 8; the apostle Paul brought judgment upon "Elymas the sorcerer" in Acts 13; Paul and Silas confronted a "slave girl with a spirit of divination" in Acts 16; and, when a revival broke out in Acts 19, the new believers in Ephesus "burned scrolls of sorcery and magic." Also, I will share some personal stories of how I've had to deal with witchcraft in my pastoral ministry over the years. I believe these testimonies will reveal key aspects of witchcraft that Christian believers are facing today. The evil is the same, but the tools and methods are sometimes different. The bondage never changes, however. Seller Inventory # APC9781691502523

2. The Christian & Witchcraft: Dealing with Demonic, Satanic, and Occultic Darkness Through the Power of God

3. The Christian and Witchcraft

4. The Christian & Witchcraft: Dealing with Demonic, Satanic, and Occultic Darkness Through the Power of God

5. The Christian and Witchcraft