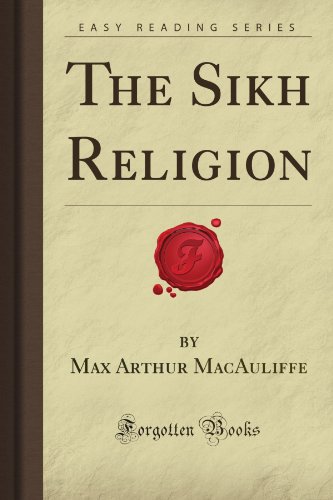 This is one of the first (and still one of the few) comprehensive books about the Sikh religion in the English language. MacAuliffe had extensive access to manuscripts of the Sikh sacred writings (the Granth), as well as support from Sikh scholars and leaders of the time. This volume covers Guru Nanak, the founder of Sikhism. This is volume one of six; future volumes are forthcoming. (Quote from sacred-texts.com)

MacAuliffe was born at Newcastle West, County Limerick, on 10 September 1841. He was educated at Newcastle School, Limerick, and Springfield College. He attended Queen's College Galway between 1857 and 1863, being awarded junior scholarships in the Literary Division of the Arts Faculty for 1857-8, 1858-9, and 1859-60. He was awarded a B.A. degree with first class honours in Modern Languages in 1860. He obtained a senior scholarship in Ancient Classics for 1860-1, and a senior scholarship in Modern Languages and History for 1861-2. He also served as Secretary of the college's Literary and Debating Society for the 1860-1861 session.

MacAuliffe wrote the definitive English translation of the Sacred Book of the Sikh religion, the Guru Granth Sahib. He also wrote The Sikh Religion: its Gurus, Sacred