Items related to The Available Means of Persuasion: Mapping a Theory... 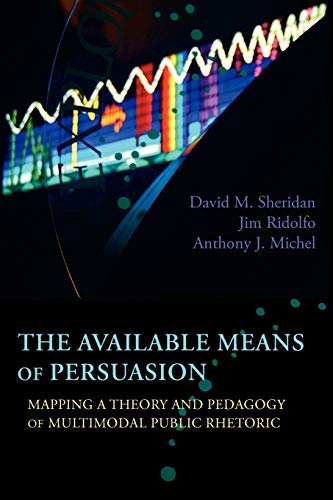 The Available Means of Persuasion Exploring the ways that public rhetoric has changed due to emerging technologies that enable people to produce, reproduce, and distribute compositions that integrate visual, aural, and alphabetic elements, the authors argue that to exploit such options fully, rhetorical theory and pedagogy need to be reconfigured. Full description

The Available Means of Persuasion: Mapping a Theory and Pedagogy of Multimodal Public Rhetoric (Paperback)

Book Description Paperback. Condition: New. New. Language: English. Brand new Book. NEW MEDIA THEORY Series Editor, Byron Hawk From the beginning, rhetoric has been a productive and practical art aimed at preparing citizens to participate in communal life. Possibilities for this participation are continually evolving in light of cultural and technological changes. THE AVAILABLE MEANS OF PERSUASION: MAPPING A THEORY AND PEDAGOGY OF MULTIMODAL PUBLIC RHETORIC explores the ways that public rhetoric has changed due to emerging technologies that enable us to produce, reproduce, and distribute compositions that integrate visual, aural, and alphabetic elements. David M. Sheridan, Jim Ridolfo, and Anthony J. Michel argue that to exploit such options fully, rhetorical theory and pedagogy need to be reconfigured. Rhetorical concepts such as invention, context, and ethics need to be transformed, which has important implications for the writing classroom, among other sites of rhetorical education. Sheridan, Ridolfo, and Michel suggest an expanded understanding of the ancient rhetorical concept of kairos (the opportune moment) as a unifying heuristic that can help theorists, teachers, and practitioners understand, teach, and produce multimodal public rhetoric more effectively. In this expanded sense, kairos includes considerations of genre and dissemination through material-cultural contexts. Ultimately, they argue that culture itself is at stake in our understanding of multimodal public rhetoric. Important cultural categories such as race, class, gender, sexuality, and place, are produced and reproduced not just through the dynamics of language but through the full range of multimodal practices. DAVID M. SHERIDAN is an assistant professor in Michigan State University's Residential College in the Arts and Humanities, where he teaches courses on writing, creativity, technology, and media. He also directs the RCAH Language and Media Center. His previous publications include articles in JAC, Enculturation, and Computers and Composition. He co-edited, with James Inman, Multiliteracy Centers: Writing Center Work, New Media, and Multimodal Rhetoric (Hampton, 2010). Under the sponsorship of MSU's Writing in Digital Environments (WIDE) Research Center, Sheridan is working with others to develop a game called INK-a multiplayer virtual world designed to function as a rich environment for public rhetorical practices. In 2012 Sheridan was the recipient of MSU's Teacher-Scholar Award. JIM RIDOLFO is Assistant Professor of Composition and Rhetoric at the University of Cincinnati. He received his PhD in 2009 from the Michigan State University Rhetoric and Writing program, where he worked for six years at the Writing in Digital Environments Research Center. His work has appeared in Ariadne, Journal of Community Informatics, JAC, Enculturation, Journal of Community Literacy Studies, Pedagogy, Kairos, and Rhetoric Review. He is currently a 2012 Fulbright Middle East and North Africa Regional Research Scholar and is working on his second book. He lives with his partner Janice Fernheimer and their two pet bearded dragons, Electra and Salsa. ANTHONY J. MICHEL is currently Chair of the English Department at Avila University in Kansas City, where he teaches courses in American literature and composition and rhetoric. His research interests are in alternative rhetorics, social activism, new media, and writing theory. He has written on a variety of subjects, including Julie Dash's film Daughters of the Dust, hip hop culture in the writing classroom, and the role of new media in social movements. His articles and chapters have appeared in JAC, Enculturation, and in several edited collections. Seller Inventory # AAV9781602353084

The Available Means of Persuasion: Mapping a Theory and Pedagogy of Multimodal Public Rhetoric