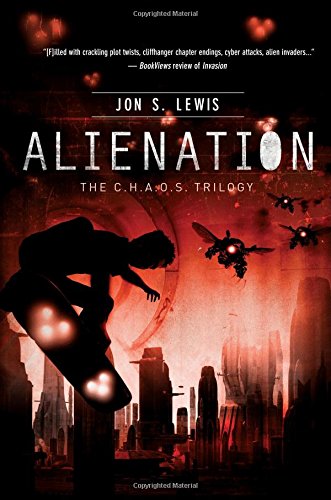 But before he can save the world, he has to survive the day.

All Colt wants to do is return to his old life . . . where aliens don’t exist . . . where mankind hasn’t been targeted for destruction . . . and where his parents are still alive. Unfortunately life doesn’t work that way.

The United States government believes Colt holds the key to our survival, so they’re sending him to the CHAOS Military Academy along with his best friends Oz and Danielle. There they’ll be trained to defend Earth against a swarm of alien shape shifters known as the Thule. But someone is trying to eliminate Colt before he can lead that charge. Shocked to learn about key events in his past and unsure who he can trust, he is alienated and on the run.

In a world of high-tech gear, shape-shifting aliens, simulated reality, and hover boards, Colt must step into his true destiny before our world falls into chaos.

“Non-stop, action-packed thrills and excitement made it impossible to put down . . . [a] cliffhanger that left me wanting more.” —SciFiChick.com

"Non-stop, action-packed thrills and excitement made it impossible to put down . . . [a] cliffhanger that left me wanting more." * SciFiChick.com, regarding Alienation * . . Crackling plot twists, cliffhanger chapter endings, cyber attacks, alien invaders, and an undercurrent of teen romance." * BookViews by Alan Caruba * "A fun read." * Publishers Weekly * "Lewis is a veteran of the comic-book industry, and his plot is a domestic read-alike of Alex Rider." * Kirkus Reviews *

Jon S. Lewis is the coauthor of the Grey Griffins trilogy and the upcoming Grey Griffins Clockwork Chronicles. He also writes for the DC COMICS family of publishers. He resides with his family in Arizona.