Items related to Francis of Assisi: A Revolutionary Life

Francis of Assisi: A Revolutionary Life 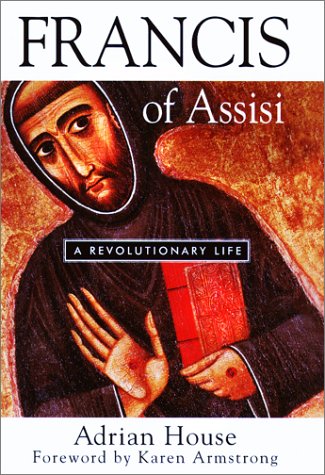 Traces the life and teachings of St. Francis of Assisi and describes his impact on society in medieval Europe.

In the Preface to Francis of Assisi Adrian House writes that the inspiration for writing his biography came while visiting an Anglican friary in Dorset where all the visiting guests, be they bishops, ex-prisoners, retired generals, travellers or alcoholic stockbrokers, were treated identically by the friars, making it impossible to know for certain who was who. At the start of a story so synonymous with the compassionate and loving acceptance of all forms of life, this anecdote serves as a powerful reminder of St Francis's enduring appeal and popularity--the man whom the French agnostic scholar Ernest Renan called "the only perfect Christian" after Christ.

House's real achievement is to relate what he calls "the almost continual drama" of Francis's life to the political, social, economic, military and religious upheavals of 12th and 13th century Italy, not as though these were noises off to a larger drama, but in order to explain the culture that formed Francis, and expected his compliance to its mores--a culture that, to a great extent, he set about changing with ferocious energy and wit.

The picture of Francis that emerges, then, is far more complex and, of course, more fully realised than the hazy image that many hold in their heads from stories such as that of his preaching to the birds. He was not only the great orator and evangelist we think we know but also: soldier, poet (he wrote the first surviving poetry in Italian and is said to have inspired Dante away from Latin to the same), socialite, linguist, merchant, troubadour and ecologist. Notably, though educated he was no scholar, and comes across as an non-doctrinaire and unconventional man of action who was as hard on himself as he was on the feudal system that created so much poverty and suffering. In one story he eats some chicken while ill (he had malaria) and fasting. Thinking this self-indulgent, he drags himself into Assisi where he preaches from the pillory, strips naked and is led to the stocks on a rope to confess gluttony and deception before a shocked crowd. When his bones were exhumed in 1978 his skeleton showed signs of extreme malnutrition and osteoporosis. He died aged 44.

The bourgeois who embraced poverty; the soldier who preached peace; the snob who washed the wounds of lepers: there is hardly an incident in this absorbing biography that does not enlarge our understanding of Francis's vision of God's love lived out generously, like a diamond giving off "splinters that seem to differ according to the way they are struck by the light". --Anthony Wilson

"A fast moving, fresh and engaging unorthodox account of a man who set his face against the pomp and wealth of the medieval Church, and - in more recent times - has been hailed as the patron saint of the ecological movement" (Jeremy Lewis Sunday Express)

"Gentle and reflective...soothing and rewarding...This is a book to be grateful for. It is a beautifully clear exposition of a life that is worth emulating" (Ann Wroe Daily Telegraph)

"A flowing, readable and often immensely elegant account of a remarkable life. It more than manages to accommodate a polished and intelligent retelling with a strong narrative thrust, an absence of arcane language, and a freshness and vitality that grows out of observations made while house followed in Francis's footsteps around the shore of the Mediterranean" (Peter Stanford Independent)

1. Francis of Assisi: A Revolutionary Life

2. Francis of Assisi A Revolutionary Life

Book Description Hardcover. Condition: New. Dust Jacket Condition: New. First Edition; First Printing. This specific hardback book is in new condition with a hard board cover that has sharp edges and corners and has a tight binding. The pages are clean, crisp, unmarked and uncreased. The dust jacket is in fine condition with barely detectable wear if any. We package all books in custom cardboard book boxes for shipment and ship daily with tracking numbers.; 9.1 X 6.1 X 1.3 inches; 336 pages. Seller Inventory # 19177

3. Francis of Assisi: A Revolutionary Life

4. Francis of Assisi: A Revolutionary Life

5. Francis of Assisi: A Revolutionary Life

6. Francis of Assisi: A Revolutionary Life