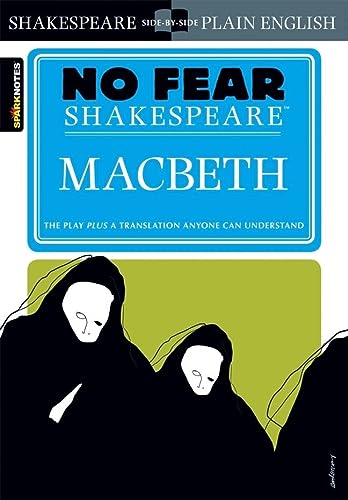 Read Shakespeare's plays in all their brilliance--and understand what every word means! Don't be intimidated by Shakespeare! These popular guides make the Bard's plays accessible and enjoyable. Each No Fear guide contains The complete text of the original play A line-by-line translation that puts the words into everyday language A complete list of characters, with descriptions Plenty of helpful commentary

One of Shakespeare's greatest, but also bloodiest tragedies, was written around 1605 to 1606. Many have seen the story of Macbeth's murder and usurpation of the legitimate Scottish King Duncan as having obvious connection to contemporary issues regarding King James I (James VI of Scotland), and the Gunpowder Plot of 1605. King James was particularly fascinated with witchcraft, so the appearance of the witches chanting "Fair is foul, and foul is fair" at the opening of the play seemed particularly topical, as was Macbeth's betrayal of Banquo, from whom James claimed direct descent.

However, the play is clearly far more than a piece of royal entertainment. It is also a fast-moving and dramatically satisfying piece of theatre. Macbeth's existential struggle between loyalty to his King and his "Vaulting ambition" is fascinating to watch, as his is struggle with Lady Macbeth, and her own terrifying refusal of her maternal role. The play shows an intensification of Shakespeare's interest in mothers and their effect upon ruling masculinity, and also contains some of the most memorable speeches in the entire canon, including Macbeth's reflections that ultimately life "is a tale/Told by an idiot, full of sound and fury,/Signifying nothing". --Jerry Brotton

""Macbeth" is a blast...ghoulish...beguiling...sardonic...an expression of how captivating an evening of crackling Shakespeare can be." -- Peter Marks, "The Washington Post"

"The explosive and overwhelming effect of a truck bomb...this horrific, riveting "Macbeth" ought to be seen by as many people as possible." -- Terry Teachout, "The Wall Street Journal"

Book Description Soft cover. Condition: New. We offer fast reliable shipping on all orders. All are brand new and have a 100% money back guarantee. Seller Inventory # ABE-1501681416423

Book Description Paperback. Condition: New. Study Guide ed. Language: English. Brand new Book. No Fear Shakespeare gives you the complete text of Macbeth on the left-hand page, side-by-side with an easy-to-understand translation on the right.Each No Fear Shakespeare contains:The complete text of the original playA line-by-line translation that puts Shakespeare into everyday languageA complete list of characters with descriptionsPlenty of helpful commentary. Shakespeare's classic tale of witches, murder, and madness."Double, double toil and trouble; Fire burn and caldron bubble. Fillet of a fenny snake, In the caldron boil and bake; Eye of newt and toe of frog, Wool of bat and tongue of dog, Adder's fork and blind-worm's sting, Lizard's leg and howlet's wing, For a charm of powerful trouble, Like a hell-broth boil and bubble. Double, double toil and trouble; Fire burn and caldron bubble. Cool it with a baboon's blood, Then the charm is firm and good."Macbeth: IV.i 10-19; 35-38. Seller Inventory # ABZ9781586638467