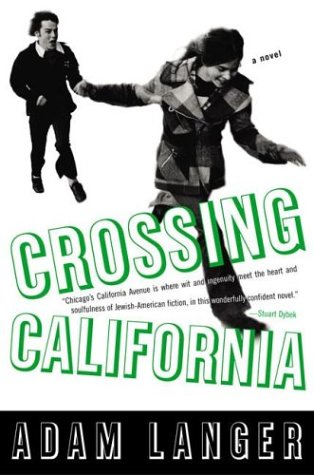 Three close families living in the middle-class and upper-middle-class areas of Chicago's West Rogers Park neighborhood find their lives and friendships impacted by world events from 1979 to 1981, including the Iran hostage crisis, Reagan's election, and the deaths of famous musicians. 50,000 first printing.

Adam Langer has been a senior editor of Book magazine and a recipient of a prestigious National Arts Journalism fellowship at Columbia University. He has worked extensively as a print journalist, film producer, and playwright and has been featured on NPR, CNN Headline News, Fox News, and E! Entertainment Television. Crossing California is his first novel.

Book Description Riverhead, New York, 2004. Hardcover. Condition: New. Dust Jacket Condition: New. First Edition. The â Californiaâ of the title of this book is notâ ¦California. Itâ s actually California Avenue, in Chicagoâ s West Rogers Park neighborhood, and divides the upper-middle-class Jewish families on the west from the mostly middle-class Jewish households east of the divide. Crossing California follows three families, including their teenage children, in the eventful months from November 1979 through January 1981â "a period that spans the Iran hostage crisis through the inauguration of Ronald Reagan. Mark Karmine, in his review for the New York Times, said Crossing California â hits high points of comic empathy,â and Kristin Kloberdanz, of the Baltimore Sun, called it a â dazzling debut novelâ that is â powerful and amusing.â Langer signed our new copy and it is in perfect condition. The Library of Congress catalog entry for this title says it was printed on alkaline paper and gives its physical description as: 432 p. : map ; 24 cm. Seller Inventory # 0000139

Book Description Condition: New. Poignant, ambitious, and tremendously fun, Crossing Californiais the fiction discovery of the season-a novel about two generations of family and friendship in Chicago from November 1979 through January 1981. In 1979 California Avenue, in Chicago's West Rogers Park neighborhood, separates the upper-middle-class Jewish families from the mostly middle-class Jewish residents on the east of the divide. This by turns funny and heartbreaking first novel tells the story of three families and their teenage children living on either side of California, following their loves, heartaches, and friendships during a memorable moment of American history. Langer's captivating portraits, his uncanny and extraordinarily vivid re-creation of a not-so-past time and place, and his pitch-perfect dialogue all make Crossing California certain to evoke memories and longing in its readers-as well as laughter and anxiety. Whether viewed as an American Graffitifor the seventies, The Jewish Corrections, a Chicagoan Manhattan, or early Philip Roth for a later generation, Crossing Californiais an unforgettable, and thoroughly enjoyable, contribution to contemporary fiction. Seller Inventory # 9781573222747