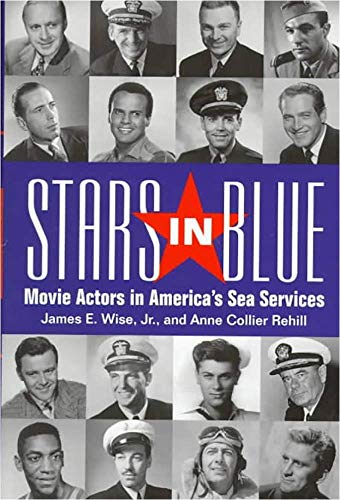 Henry Fonda, Humphrey Bogart, Robert Montgomery, and Ernest Borgnine are among many stars who have portrayed naval personnel on film - but do their fans know that Fonda won a Bronze Star for his actions during Pacific naval encounters, that Bogart dropped a fleeing prisoner with his .45, that Montgomery was awarded a Bronze Star for his courageous performance of duty during the Normandy invasion, or that Borgnine hunted U-boats off America's East Coast? <br><br>A virtual who's who, this entertaining and historically accurate work brings to life these and dozens of other stars' naval and coast guard service backgrounds and film careers. It is drawn from interviews with the actors, diaries, letters, and official military and film industry archives. Here you'll find out how John Howard won a Navy Cross, how Navy Hellcat ace Wayne Morris downed seven Japanese planes, how UDT frogman Aldo Ray reconned the Okinawa landing beaches, how Eddie Albert saved more than a dozen wounded marines on the bloody reefs of Tarawa, and how Hedy Lamarr patented World War II communications antijamming technology still in use today.<br><br> Rarely have movie stars' real lives been portrayed in such detail, including interesting anecdotes from their Hollywood careers and never-before-published photographs from their military careers, including Paul Newman as a Navy radioman/gunner who flew in torpedo bombers during World War II.

Exciting new evidence that the acting profession is best practiced by those who have known firsthand the extremes of life's experiences (Douglas Fairbanks, Jr)

What did you do in the war?” is still a hot question when its answers come from celebrities. Wise and Rehill's compendium offers a sunny look at the sea services careers of U.S. movie actors . . . A volume as colorful as black and white can be and a vital addition to the movie-star trivia shelves (Booklist)

Highly recommended. A fascinating account of the lives of more than fifty movie celebrities who served in the U.S. Navy and Coast Guard (World War II Times)

<strong>James E. Wise, Jr.</strong>, a former naval aviator and intelligence specialist, is the co-author of many books published by the Naval Institute Press, including <em>Shooting the War, Soldiers Lost at Sea</em>, and<em> International Stars at War</em>. <br><br><strong>Anne Collier Rehill</strong>, who also co-authored <em> in the Corps</em> with Wise, has published numerous articles and essays and taught English and French. She now works as a freelance writer and editor.