Items related to Destined to Survive

Poolton, Jack A. Destined to Survive 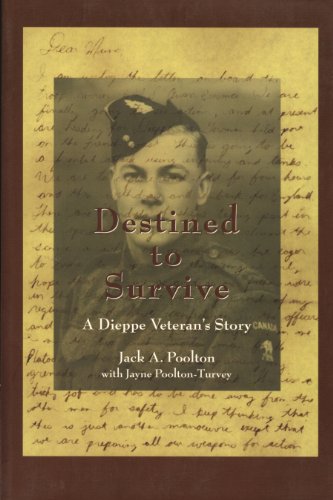 Private Jack Poolton was among the Canadians landing at the disastrous raid on Dieppe. Fortunate to have survived, Jack was taken to a prisoner of war camp in Germany. In Destined to Survive: A Dieppe Veteran’s Story, Jack Poolton relates the story of his training, capture, and experiences in the POW camp. We follow Jack’s three escape attempts, and his subsequent punishment. And we share his elation when Jack and his fellow prisoners are liberated by American soldiers.

Poolton and the other POWs never lost their desire to escape. Throughout the ordeal, Jack dreamed of one day celebrating the end of the war, and an allied victory. He eventually celebrated V-E Day in England.

Written as a tribute to the fifty-fifth anniversary of the Dieppe Raid, Destined to Survive is an extraordinary contribution to Canadian military history. Poolton’s honest prose reveals the emotions of a man devoted to King and country, and determined to survive at all costs. The gripping account brings the reader to a new understanding about soldiers, prisoners, and war.

Jack A. Poolton was a private in the Canadian Second Division, D Company, in World War II. After the war he worked as a mechanic until retirement at age 65. He and his wife, Colette, have three children and nine grandchildren.