Items related to The Lesson 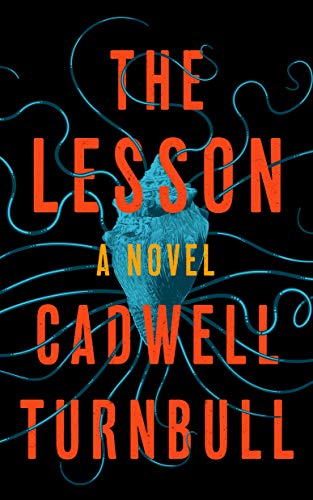 An alien ship rests over Water Island. For five years the people of the US Virgin Islands have lived with the Ynaa, a race of superadvanced aliens on a research mission they will not fully disclose. They are benevolent in many ways but meet any act of aggression with disproportional wrath. This has led to a strained relationship between the Ynaa and the local Virgin Islanders and a peace that cannot last.

A year after the death of a young boy at the hands of an Ynaa, three families find themselves at the center of the inevitable conflict, witnesses and victims to events that will touch everyone and teach a terrible lesson.

"Turnbull is a rising star in the science fiction and fantasy world."

"Cadwell Turnbull paints a stunningly intricate portrait of humanity, capturing hopes and dreams, flaws and failings with remarkable depth and texture. The Lesson is a blast to read and a meaningful exploration of the bearing of colonialism and the perils of human ambition."

-- "Sylvain Neuvel, author of The Test and the Themis Files trilogy"

"A parable of cultural conflict, conflicting moralities, colonialism, and the costs of being a decent person in the midst of desperate times...This is one of those books in which the setting becomes almost a character in itself. The Virgin Islands and their people are drawn in vibrant detail...Turnbull has been compared to Octavia Butler, and in his case I think the observation is a valid one. The Lesson isn't just a serious, important book--it's also a fun and rewarding one."

"Emotional prose and distinctive characters highlight an incredible story that will touch readers' hearts and minds. A compelling tale of invasive occupation and emotional uprising, Turnbull's debut is complex and enthralling. It's a must for all libraries, and the writer, who crafts speculative stories with black characters on par with Octavia Butler, is definitely one to watch."

"Bring[s] to mind the urgent and vibrant writing of Octavia Butler...From beginning to end, The Lesson is thrilling, moving and thought-provoking. This may be Turnbull's debut, but it reads like the work of a seasoned writer. It's also proof that science fiction is more than entertaining--it's a vital genre that lays bare the perils of the age and the boundlessness of the human spirit.

"The Lesson is a welcomed addition to the new wave of Virgin Islands literature. The plot is smooth and exciting, the polemics are subtle but smart, and the characters are heartfelt."

-- "Tiphanie Yanique, author of Land of Love and Drowning"

"The Lesson is a story that should not be missed by readers who embraced such books as Emily St. John Mandel's Station Eleven or even Arthur C. Clarke's Childhood's End...It's a tribute to Turnbull's storytelling that everything unfolds through scenes that ratchet up a slow-burn tension that climaxes in something truly gripping and shocking...The Lesson is definitely one of those books that wants to provoke a deeply individual response from each of its readers, rather than spelling out a conclusive, pedantic "lesson" for us all. Perhaps that's a good storytelling lesson more writers ought to heed."

"A compelling and layered narrative that explores colonialism and our messy human flaws through a diverse and painfully real cast of characters. The Lesson is smart, full of dry wit and creeping dread--a unique and artful debut."

"Cadwell Turnbull's The Lesson brings an alien invasion to St. Thomas with a breadth that encompasses the past, present, and future. As his well-drawn characters wrestle with interspecies challenges, Turnbull imparts lessons that both embrace and transcend culture and race to drive at the heart of what it means to be human."

"In The Lesson Cadwell Turnbull, by setting his story in St. Thomas in the Virgin Islands, makes something completely new of the old theme of humans' first contact with superior aliens. Putting these 'colonizing aliens' in a place shaped by colonialism opens new perspectives on issues of race and culture and sex and exploitation. But the true wonder of this novel is its beautifully realized portrayal of Charlotte Amalie and its deeply human and complex characters, young and old, all of them transformed by the arrival of the ambiguously motivated Ynaa. It's a story of mystery, romance, tragedy, and redemption. Like Octavia Butler and Ursula K. Le Guin before him, Turnbull uses the tools of science fiction to illuminate the human heart. The Lesson stands at the beginning of what I expect to be a long and illustrious career."

-- "John Kessel, Nebula Award-winning author of The Moon and the Other and Pride and Prometheus" About the Author:

Cadwell Turnbull is a graduate from the North Carolina State University's Creative Writing MFA in Fiction and English MA in Linguistics. He was the winner of the 2014 NCSU Prize for Short Fiction and attended Clarion West 2016. His short fiction has appeared in The Verge, Lightspeed, Nightmare, and Asimov's Science Fiction. His Asimov's short story "When the Rains Come Back" made Barnes and Noble's Sci-Fi & Fantasy's Short Fiction Roundup in April 2018. His Nightmare story "Loneliness Is in Your Blood" was selected for The Best American Science Fiction and Fantasy 2018. His Asimov's novelette "Other Worlds and This One" was also selected by the anthology as a notable story. The Lesson is his debut novel.

3. The Lesson (Hardback or Cased Book)

Book Description Hardcover. Condition: New. Hardcover. An alien ship rests over Water Island. For five years the people of the US Virgin Islands have lived with the Ynaa, a race of superadvanced aliens on a research mission they will not fully.Shipping may be from multiple locations in the US or from the UK, depending on stock availability. 286 pages. 0.499. Seller Inventory # 9781538584644