Items related to The Avro Arrow: For the Record

Campagna, Palmiro The Avro Arrow: For the Record 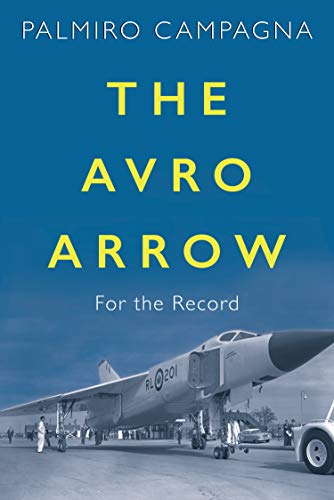 Declassified government records shed additional light on the cancellation and subsequent destruction of the Avro Arrow.

The controversial cancellation of the Avro Arrow ― an extraordinary achievement of Canadian military aviation ― continues to fire debate today. When the program was scrapped in 1959, all completed aircraft and those awaiting assembly were destroyed, along with tooling and technical information. Was abandoning the program the right decision? Did Canada lose more than it gained?

Brimming with information to fill in gaps in the Arrow’s troubled history, and with an update on the latest search for the scale models launched deliberately into Lake Ontario as part of the test program, The Avro Arrow tackles the outstanding questions head on.

Palmiro Campagna is the author of Storms of Controversy: The Secret Avro Arrow Files Revealed, Requiem for A Giant: A.V. Roe Canada and the Avro Arrow, and The UFO Files: The Canadian Connection Exposed. He lives in Ottawa.

During the Second World War, Britain looked to Canada for assistance in providing Lancaster bombers. The National Steel Car plant in Malton, Ontario, was chosen to manufacture those bombers, as it was already building aircraft parts. In November 1942, the federal government acquired the company, changing its name to Victory Aircraft Limited. The firm soon became renowned for building superior Lancasters. In 1943, Sir Roy Dobson, managing director of A.V. Roe, a division of Hawker Siddeley, located in Manchester, U.K., visited the company and was very impressed.

After the war, Sir Roy returned to Canada, and, working with Fred T. Smye, the director of aircraft production at Victory, and other Victory officials, established discussions with C.D. Howe, the Canadian minister of munitions and supply to acquire Victory on a rental-purchase plan, providing the management of Hawker Siddeley agreed. On December 1, 1945, the deal was finalized, and A.V. Roe Canada was established. Fred Smye was appointed assistant general manager and would become the administrative force behind A.V. Roe Canada’s projects.

The creation of the company meant that Canada at last had the capacity to design and build its own aircraft, both for the commercial market and for the Royal Canadian Air Force (RCAF), freeing it from the necessity of relying on foreign sources.

In 1946, Turbo-Research Limited, another Crown Corporation, this one involved in engine research, was acquired by A.V. Roe to design and build engines. On December 2, 1954, A.V. Roe was split into the newly named Avro division, responsible for aircraft design and production, and Orenda, responsible for engine design and production. After much discussion with officials from Trans-Canada Airlines and C.D. Howe, A.V. Roe was given the go-ahead to embark on the C102 Jetliner design, a commercial, regional, passenger jet aircraft, a type of aircraft that didn’t exist at the time. Likewise, after separate discussions with the RCAF and Howe, the CF-100, a military subsonic fighter, was given the green light. Both were begun in 1946. The Jetliner would fly in 1949 but would not be produced. At that time, it was said that the company had to focus on the CF-100 for the Korean War effort. The CF-100 though would not become operational until 1953, after that war was over.

In January 1952, the RCAF realized that the CF-100 would need to be replaced as it could soon be rendered obsolete as a defence tool for Canada by advances in Soviet aircraft design. Following deliberations between Canada, the United States, and Great Britain, and the examination of numerous studies of existing aircraft, a decision was made to design and develop a supersonic jet interceptor ― the Avro Arrow. The plan was to design a plane able to prevent any attack from Soviet aircraft entering North American airspace from over the North Pole. It would need to have a speed and altitude capability not then available in any other military aircraft.

By the time the Avro Arrow program was cancelled on February 20, 1959, a date dubbed Black Friday by the media, A.V. Roe Canada Limited had become the third-largest company in Canada, behind the Canadian Pacific Railway and the Aluminum Company of Canada. Part of A.V. Roe’s portfolio of companies included the Dominion Steel and Coal Corporation, along with numerous others, but its key subsidiaries remained Avro, its aircraft division, and Orenda, its engine division.

When the Arrow program was terminated, some twenty-five thousand employees lost their jobs; fourteen thousand of those had been working for Avro and Orenda, the rest were employed by the company’s various other subsidiaries or by the subcontractors working on the program. On February 26, 1959, ten thousand employees packed into the Coliseum building at the Canadian National Exhibition grounds in Toronto in a massive protest against the cancellation, the government, and, in particular, the prime minister, John Diefenbaker. Many had signs indicating they had voted for the Conservatives once but would never do so again. In the end, the protests had no effect in getting the cancellation reversed. Diefenbaker would, however, go on to be defeated in the election of 1963.

The fallout from the cancellation was enormous and extended far beyond the obviously significant loss of twenty-five thousand jobs. The Financial Post of September 20, 1958, published a list of businesses across Canada that would lose contracts as a result of the termination. The article stated that one hundred thousand Canadians would be affected, along with many new industries, particularly in the area of electronics.

According to author and ex-Avro employee E.K. Shaw, 650 major subcontractors were working on various aspects of the program. Their orders for work in 1959 would total some $25 million. To quote from an internal memo that was sent to remaining employees some three months after the cancellation:

No effort has been made to date to settle termination contracts with any of the hundreds of companies involved.... Many of them are owed from hundreds of thousands to millions of dollars for investments already made in plant equipment and tooling and for complete parts and equipment already supplied complete for the first 37 aircraft. Many of these firms are facing bankruptcy as a result. However, if these contract termination charges were to appear in the government’s budget in the current year, it would become obvious at once to even the most thoughtless Canadian that we had not only lost a $300 million investment, but that it had also cost us as much to scrap it as it would have to complete it....

Not only did the cancellation of the Arrow program have significant financial consequences for many companies, a Globe and Mail editorial in December 1958 observed the following:

One of the virtues of the Arrow’s development has been its contribution to Canada’s industrial diversification. With the Arrow (and CF-100) expenditures, we have bought new skills, new techniques, new industrial processes and plants which otherwise would not exist, but which today range far beyond the needs of the Avro program in their service to Canada.

The Avro Arrow: For the Record (Paperback)

Book Description Paperback. Condition: New. Language: English. Brand new Book. Declassified government records shed additional light on the cancellation and subsequent destruction of the Avro Arrow.The controversial cancellation of the Avro Arrow - an extraordinary achievement of Canadian military aviation - continues to fire debate today. When the program was scrapped in 1959, all completed aircraft and those awaiting assembly were destroyed, along with tooling and technical information. Was abandoning the program the right decision? Did Canada lose more than it gained?Brimming with information to fill in gaps in the Arrow's troubled history, and with an update on the latest search for the scale models launched deliberately into Lake Ontario as part of the test program, The Avro Arrow tackles the outstanding questions head on. Seller Inventory # AAR9781459743175