Items related to The Morning After: Savannah series, book 2 (Savannah... 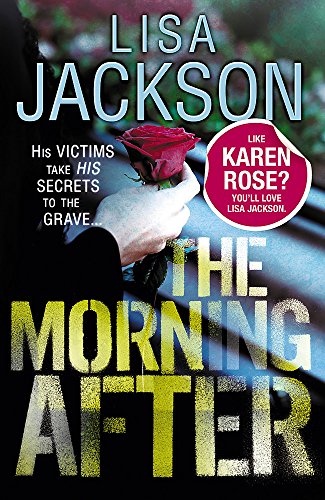 She wakes in a dark, closed space. From above her comes the muffled sound of cruel laughter, followed by the sound of earth being thrown. Pure terror takes over as she realizes she's being buried alive, and her last breath is a scream that no one but a sadistic killer will hear.

Another body is found. And another. Each gruesome discovery unnerves Nikki a little more . . . there's something familiar about it, something she should know. Now, as a serial killer pulls her ever deeper into his sick game, she has now idea how close she's getting to the truth - or how deadly it will be.

Lisa Jackson shows yet again why she is one of the best at romantic suspense. A pure nail biter. (Harlan Coben on YOU DON'T WANT TO KNOW)

Shiveringly good suspense! Lisa Jackson ratchets up the tension as one woman's desperate search for her missing son takes her to the very brink of losing her husband, her sanity, her very self. (Lisa Gardner on YOU DON'T WANT TO KNOW)

'WITHOUT MERCY blends murder mystery with romance and religious conspiracy and should appeal to fans of all three.' (West Australian on WITHOUT MERCY)

A fast-paced and surprisingly complex story... . The depiction of the protagonist... reaches an unusual depth, and the crisp, skillful language infuse every sentence with suspense...will keep readers riveted. (Publisher's Weekly on WITHOUT MERCY)

'A fast moving thriller with plenty of twists and turns, and an easy flowing style that readily catches the reader up in its thrall.' (Canberra Times on MALICE)

His victims take his secrets to the grave...Set in Savannah, this thrilling novel by Number One bestseller Lisa Jackson is the second in the Reed/Gillette series.

Book Description Paperback. Condition: Very Good. The book has been read, but is in excellent condition. Pages are intact and not marred by notes or highlighting. The spine remains undamaged. Seller Inventory # GOR005427925

Book Description Paperback. Condition: Good. The book has been read but remains in clean condition. All pages are intact and the cover is intact. Some minor wear to the spine. Seller Inventory # GOR005305498

Book Description Hodder & Stoughton, 2013. Condition: Good. Ships from the UK. Former Library book. Shows some signs of wear, and may have some markings on the inside. Seller Inventory # 16324250-20

Book Description Paperback. Condition: Good. Item is in good condition. Some moderate creases and wear. This item may not come with CDs or additional parts including access codes for textbooks. Might be an ex-library copy and contain writing/highlighting. Photos are stock pictures and not of the actual item. Seller Inventory # DS-1444780263-3