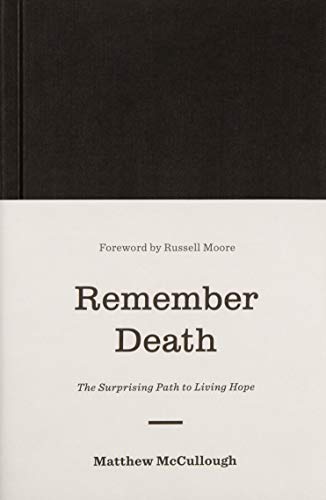 Life-expectancy worldwide is twice what it was a hundred years ago. And because of modern medicine, many of us don't often see death up close. That makes it easy to live as if death is someone else's problem. It isn't.

Ignoring the certainty of death doesn't protect us from feeling its effects throughout the lives we're living now. But this avoidance can hold us back from experiencing the powerful, everyday relevance of Jesus's promises to us. So long as death remains remote and unreal, Jesus's promises will too.

But honesty about death brings hope to life. That's the ironic claim at the heart of this book. Cultivating "death-awareness" helps us bring the promises of Jesus from the hazy clouds of some other world into the everyday problems of our world--where they belong.

Matthew McCullough (PhD, Vanderbilt University) serves as pastor of Trinity Church in Nashville, Tennessee, which he helped plant. He is the author of The Cross of War and writes occasionally for 9Marks and the Gospel Coalition.

Russell Moore (PhD, The Southern Baptist Theological Seminary) is the eighth president of the Ethics & Religious Liberty Commission of the Southern Baptist Convention, the moral and public policy agency of the nation's largest Protestant denomination. A widely-sought commentator, Dr. Moore has been called "vigorous, cheerful, and fiercely articulate" by the Wall Street Journal. He is the author of several books, including Onward, The Kingdom of Christ, Adopted for Life, and Tempted and Tried, and he blogs regularly at RussellMoore.com and tweets at @drmoore. He and his wife, Maria, have five sons.

Book Description Hardback. Condition: New. Language: English. Brand new Book. Claiming that the best way to find meaning in life is to get honest about death, this book aims to show readers the practical effect of remembering their mortality in order to make the most of their lives today. Seller Inventory # AAZ9781433560538

Book Description Hardback. Condition: New. Claiming that the best way to find meaning in life is to get honest about death, this book aims to show readers the practical effect of remembering their mortality in order to make the most of their lives today. This is a Brand New book, in perfect condition. Quick dispatch. Seller Inventory # NGR9781433560538