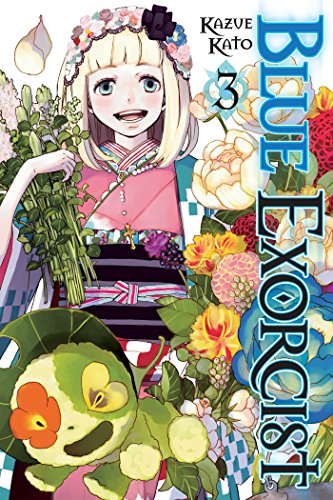 Raised by Father Fujimoto, a famous exorcist, Rin Okumura never knew his real father. One day a fateful argument with Father Fujimoto forces Rin to face a terrible truth - the blood of the demon lord Satan runs in Rin's veins! Rin swears to defeat Satan, but doing that means entering the mysterious True Cross Academy and becoming an exorcist himself. Can Rin fight demons and keep his infernal bloodline a secret? It won't be easy, especially when drawing his father's sword releases the demonic power within him!

Manga creator, writer and illustrator Kazue Kato was born in Tokyo on July 20, 1980. In 2000, at age 19, she won the prestigious Tezuka Award for her work Boku to Usagi (Rabbit and I) published in Akamaru Jump. From 2005 to 2006 her series Robo to Usakichi, a sci-fi adventure featuring a rabbit (again!) was published in the monthly magazine Shonen Sirius (Kodansha). Her latest series, Blue Exorcist, began in Jump Square in April of 2009. Kazue Kato has used a rabbit as a self-portrait in her author's notes since her debut, and her titles often have some relation to rabbits.

Book Description 2011. Paperback. Condition: New. Paperback. Fight Hellfire with Hellfire!Reads R to L (Japanese Style). Raised by Father Fujimoto, a famous exorcist, Rin Okumura never knew his real father. One day a fateful argument with Father Fuj.Shipping may be from multiple locations in the US or from the UK, depending on stock availability. 200 pages. 0.182. Seller Inventory # 9781421540344