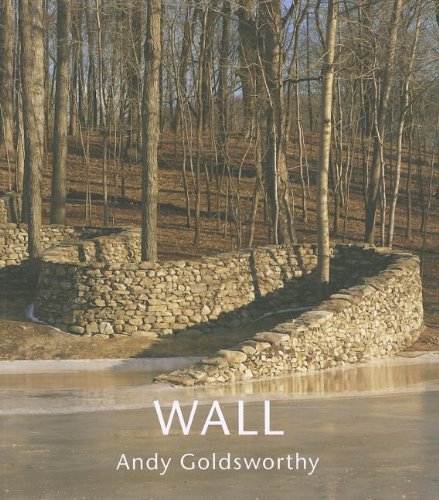 British artist Andy Goldsworthy, known for creating art outdoors and from natural materials, has now built a 2,278-foot stone wall at Storm King Art Center, a sculpture park on the Hudson River in Mountainville, New York. This sensitive and detailed response to the land--former farmland in an area once rich in stone walls--is one of his most impressive and important permanent artworks. The book's stunning color photographs show the wall from every vantage point and in all four seasons, and document ephemeral work made around it. Kenneth Baker's essay considers the Storm King wall in the context of Goldsworthy's other work.

Wall at Storm King British artist Andy Goldsworthy has now built a 2,278-foot stone wall at Storm King Art Center, a sculpture park on the Hudson River. Accompanying an exhibition at the center, the book's 60+ stunning color photos show the wall from every vantage point and in all four seasons as the artwork blends with the natural environment.

For those familiar with Stone and Wood, Wall will come as a welcome and developed exploration of the tension between the two media. Goldsworthy first incorporated dry stone walls into his sculpture in 1989, when he made his first sheep fold using techniques learnt as a seasonal farm labourer. In 1995, he was invited by the Storm King Arts Center, 500 acres of splendid museum space dedicated to the interaction of art and nature north of Manhattan, to create a piece, and the result, British sensibility on an American canvas, was Wall. Drawing on a previous work, Wall that Went for a Walk, in Grizedale forest, Cumbria, Goldsworthy traced an existent line from a derelict wall amongst trees, snaking from a track to water, and as an afterthought, out again. The original wall had been displaced by trees whose trunks Goldsworthy incorporated into the course and motion of his empathetic wall, and which would, in time, once again reclaim the ground from the wall. Wood, stone, wood, stone, with the potential for wood again: you can see why this material dynamic appealed to Goldsworthy. This permanent sculpture, an organic evolution from the artist's better known ephemeral projects with fragile materials such as leaves, grass and snow, is captured with consummate sensitivity by the lens of Jerry L. Thompson, reflecting the ephemeral, ever-changing aspect of the most solid structure reliant upon seasonal light and weather changes. Gently augmented by notebook annotation and reflection from Goldsworthy, alongside complementary images from past works (and the inclusion of potted biographies of the wallers themselves, very much integral to the project's achievement), as well as an appreciative essay by art critic Kenneth Baker, and the result is an airily attractive record, that is, as always, an essential strand of the artistic representation. Incorporating history, tradition and acutely responsive to the lay of the land, Andy Goldsworthy, like fellow British artist Richard Long, once again proves himself a landscape artist for our time. --David Vincent