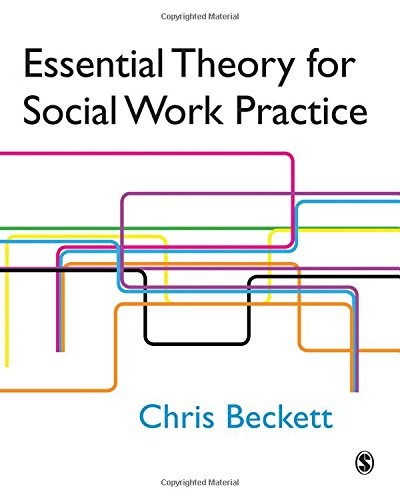 `I can say without equivocation this text is without doubt the best book about social work I have read. Chris Beckett explores the purpose, values activities and theories of social work in an ever-changing social context that is clearly identified and examined' - Stephanie Petrie, University of Liverpool

Every day social workers face decisions that will significantly impact others' lives, and it is essential that these practical assessments are supported by a sound understanding of social work theory. In this innovative and highly accessible textbook Chris Beckett explains how an understanding of these theoretical issues can improve the knowledge and skills base of professional practice.

Essential Theory for Social Work Practice is an engaging and readable text, with a distinctively realistic and honest approach to the realities of everyday practice. Framed in a comprehensive and logical structure:

- Part 2 considers how to assess, handle, and support change in others

- Part 4 strengthens these links between theory and practice.

Exercises, case examples, chapter summaries, and practice notes are used to great effect in each chapter, enabling students to apply theory to practice as they progress through the book. The book is an invaluable core text for all undergraduate social work students, and offers excellent support for practitioners in their every day practice.

"I can say without equivocation this text is without doubt the best book about social workI have read. Chris Beckett explores the purpose, values activities and theories of social work in an ever-changing social context that is clearly identified and examined - Stephanie Petrie, University of Liverpool"

He moved into academic social work in 2000, working first at Anglia Ruskin University in Cambridge and then at the University of East Anglia in Norwich.  In addition to his social work text books, he has published academic articles on a variety of topics including the use of military language in social work, the importance of realism as an ethical principle, and statistics from Sweden about child abuse, following the legal ban there on corporal punishment.  His main research area, however, has been decision-making in court proceedings about children, and decision-making about children more generally.

Chris has a parallel career as a writer of literary science fiction. (More information about his fiction can be found at www.chris-beckett.com.)  He won the Edge Hill Short Fiction prize for his story collection, The Turing Test, and the Arthur C. Clarke award for his novel Dark Eden.   He is now a full-time writer.     His view is that ‘academic’ and ‘creative’ writing have more in common than might at first sight appear: in both cases the author begins with a jumble of ideas that seem to him to be in some way linked together, and attempts, in large part by a combination of intuition and trial and error, to impose some shape and structure.

Chris has three adult children, and lives in Cambridge with his wife Maggie and sundry animals.

Book Description SAGE Publications Ltd, 2006. Paperback. Condition: VERY GOOD. Pages are intact and are not marred by notes or highlighting, but may contain a neat previous owner name. The spine remains undamaged. Supplemental materials are not guaranteed with any used book purchases. Seller Inventory # 1412908744_abe_vg