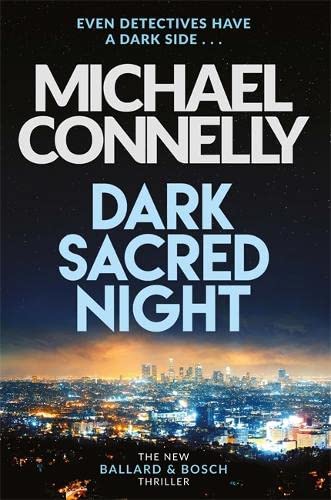 *THE FIRST EVER BOSCH & BALLARD THRILLER: THE NEW BLOCKBUSTER FROM THE NUMBER ONE BESTSELLER*

At the end of a long, dark night Detectives Renée Ballard and Harry Bosch cross paths for the very first time.

Detective Renée Ballard works the graveyard shift and returns to Hollywood Station in the early hours to find a stranger rifling through old files.

The intruder is none other than legendary LAPD detective Harry Bosch, hunting for leads in an unsolved case that has got under his skin.

Ballard escorts him out but - curious to know what he was searching for - soon becomes obsessed by the murder of Daisy Clayton. Was she the first victim of a serial killer who still stalks the streets?

For Bosch, the case is more than personal: it may be all he has left.

But in a city where crime never sleeps, even detectives have a dark side...

'One of the world's greatest crime writers'
Daily Mail

'A master of the genre'
Stephen King

'Novels of exceptional quality'
The Times

'One of the great storytellers of crime fiction'
Sunday Telegraph

'No one writes a better modern thriller than Connelly'
Evening Standard

Taut in style and sombre in tone, Dark Sacred Night finds the formerly morally incorruptible Bosch journeying into darkness even as he rages against the dying of the light (Declan Burke IRISH TIMES)

This is a must-read detective novel, for this or any year. (Michael Carlson IRRESISTIBLE TARGETS)

Ballard and Bosch could not be more different, and yet they are hewn from the same rock (Mark Sanderson EVENING STANDARD)

A new masterpiece. It's suspenseful and surprisingly moving. After 31 bestsellers he just keeps getting better. This one will fuel ones to come, as it unites veteran LA detective Harry Bosch and his newest creation, fesity detective Renee Ballard...What a team! What a hit! (Alex Gordon PETERBOROUGH EVENING TELEGRAPH)

Brilliant written in Connelly's inimitable descriptive style and compulsively readable, we keep company with his characters in the traffic jams of LA and the endless cheap diners where the cops catch their breakfast after an all-nighter. The intertwining of character is as fascinating as the cases they confront, and we are along breathlessly for the whole ride. We can only hope that the team of Ballard and Bosch will run for some years to come. (Marina Vaizey THE ARTS DESK)

Connelly's most famous creation, retired LAPD detective Harry Bosch,, teams up with detective Renee Ballard to solve the 2009 murder of a 15-year-old runaway in a gripping, fast-paced story. (MAIL ON SUNDAY)

At the end of a long night, Detectives Renée Ballard and Harry Bosch cross paths for the first time. The new blockbuster crime thriller from the #1 bestseller.

Book Description Hardcover. Condition: New. Dust Jacket Condition: New. 1st Edition. Hardback. New. London, U.K. Book Condition: New. Dust Jacket Condition: New. First Edition, First Impression. Without Dedication. 437 pp. Numbered Line: 10-1. In Stock.- THANKS! We aim to provide you with an excellent service throughout; Fast delivery guaranteed; Shipped promptly from our UK Warehouse. IN EXCELLENT CONDITION. PLEASE CONTACT US BEFORE ORDERNG THIS BOOK TO CONFIRM BOOK CONDITION. Shipping is normally same day from the UK. "UK BASED SELLER ALL OVERSEAS SHIPPING VIA AIRMAIL". THANKS! We do not stock Ex-Library or Book Club editions. We offer a money back guarantee if you are not fully satisfied, please contact us if you have any questions. Bookseller Inventory #O. 201908912_171846. / 201909171857_1. Seller Inventory # 005285