Items related to The Antifascist Education: Denazification in Soviet-occupied... 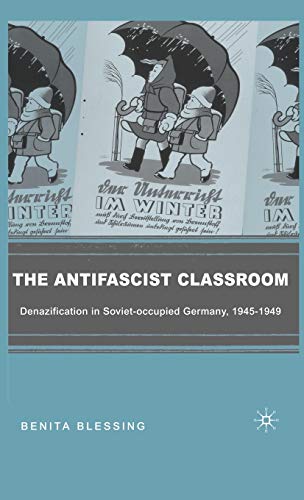 This study explores the history of the "new school" that developed in the immediate postwar period and its role in communicating antifascism to young people in the Soviet zone. Blessing traces how the decisions about how to educate young people after twelve years of a National Socialist dictatorship became part of a broader discussion about the future of the German nation.

'Blessing has written a thoroughly researched, well-argued, and absorbing book on a subject of enormous significance to our understanding of the origins and early development of communist East Germany. For anyone interested in how the 'antifascist classroom' shaped this process, it is essential reading.' - The American Historical Review

'his book, dealing with the attempts of East German pedagogues to create in the Soviet-occupied zone of Germany an antifascist democratic 'unity school' . . . does far more than report on these efforts. It touches on one of mankind's most troubling conundrums: how people of good will are persuaded or persuade themselves to persist in their idealistic endeavors even when they have come to know that their work has become part of a pernicious state apparatus or is put to use for evil purposes...Blessing should be complimented on a research assignment well executed and reported.' - Jurgen Herbst, History of Education Quarterly

'This book throws new light on the period between the end of the war and the founding of the GDR by focusing on the role of the school system in the Soviet zone and the attempt by the Sozialistische Einheitspartei Deutschlands (SED) to create a new antifascist identity in the eastern part of Germany...a very useful contribution to this debate for all researchers and students interested in the nature of eastern Germany's development after 1945.' - H-German

'This sensitive study explores the efforts of antifascist, democratic educators to create a comprehensive, unified school system in the Soviet occupation zone of Germany after 1945. By examining a plethora of teachers' and pupils' materials, the book recaptures the elusive hopes for a new beginning between the collapse of the Nazi dictatorship and Communist domination.' - Konrad H. Jarausch, Director, the Zentrum für Zeithistorische Forschung, Potsdam, and Lurcy Professor, the University of North Carolina, USA

'Blessing fills in an important gap in our understanding of the Soviet Zone of Occupation with her fine history of the beginning of the East German school system. Particularly interesting is her empathetic and lively analysis of thousands of essays and compositions of school children from the period itself, which she has found in the archives.' - Norman M. Naimark, author of The Russians in Germany: A History of the Soviet Zone of Occupation, 1945-1949

'A compelling study of the everyday life of antifascism in the first years after World War II. Benita Blessing explores the grass-roots efforts to establish a comprehensive, secular 'new school' in order to reclaim Germany's children from the Nazis and to build socialism. She incisively connects antifascism to Germany's humanist tradition but exposes as well how it blurred the Nazi past and encouraged narratives of victimhood. A timely and provocative study into the prehistory of the German Democratic Republic.' - Peter Fritzsche, University of Illinois, USA, author of Stranded in the Present: Modern Time and the Melancholy of History

An exploration of how educational decisions in postwar Germany reflected broader discussions about Germany's fascist past and its possible future.

Book Description Palgrave USA, United States, 2006. Hardback. Condition: New. 2006 ed. Language: English. Brand new Book. This study explores the history of the New School that developed in the postwar period and its role in communicating antifascism to young people in the Soviet zone. Blessing traces how the decisions about how to educate young people after the National Socialist dictatorship became part of a broader discussion about the future of the German nation. Seller Inventory # LHB9781403976123