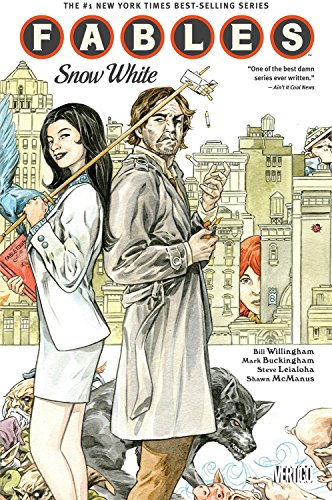 With Castle Dark now back in the hands of the Fables, mysteries both young and old begin to challenge the residents of Fabletown. Bigsby and Stinky set off from Fabletown in Rose Red's blood-fueled sports car to track down the two abducted cubs. Unfortunately for Snow White, besides suffering the trauma of having two of her cubs go missing, a long forgotten secret uncovered in Castle Dark threatens to sabatoge her and Bigsby's marriage. This volume also collects the backup adventures of Bufkin and Lily from issues numbered 114-121, as well as their full length adventures found in issue numbered 124. Collected here are Fables isssues numbered 114-123 (back-up stories only), and issues numbered 124-129.

Bill Willingham has been writing, and sometimes drawing, comics for more than twenty years. During that time he's had work published by nearly every comics publisher in the business and he's created many critically acclaimed comic book series, including Elementals, Coventry, PROPOSITION PLAYER and FABLES. Along with FABLES and JACK OF FABLES, Willingham wrote the miniseries DAY OF VENGEANCE and currently writes SALVATION RUN. His work has been nominated for many awards, including the Eisner, Harvey and Ignatz comic industry awards and the International Horror Guild award. He lives somewhere near a good poker room.