Items related to Criminology: The Core 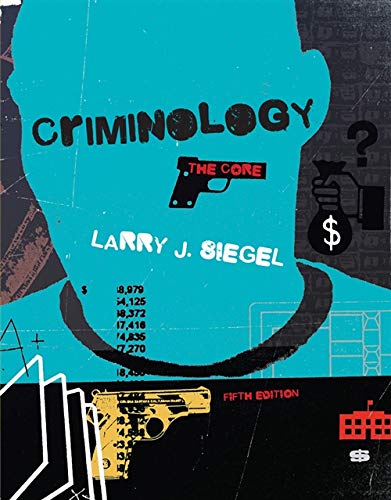 Concise, current, and affordable, best-selling CRIMINOLOGY: THE CORE, Fifth Edition delivers cutting-edge coverage in a succinct, reader-friendly paperback. Author Larry Siegel guides users through the fast-paced field of criminology, its most current research, and fascinating examples that help readers truly understand criminological theory. The book effectively uses real-world material to clarify criminology’s concepts and theories. Highlighting the interdisciplinary nature of the field, it also offers unbiased coverage of even the most controversial issues--enabling readers to form their own opinions.

LARRY J. SIEGEL was born in the Bronx, New York. While living on Jerome Avenue and attending City College (CCNY) in the 1960s, he was swept up in the social and political currents of the time. He became intrigued with the influence contemporary culture had on individual behavior: did people shape society or did society shape people? He applied his interest in social forces and human behavior to the study of crime and justice. After graduating from CCNY, he attended the newly opened program in criminal justice at the State University of New York at Albany, where he earned both his M.A. and Ph.D. degrees. After completing his graduate work, Dr. Siegel began his teaching career at Northeastern University, where he was a faculty member for nine years. After leaving Northeastern, he held teaching positions at the University of Nebraska, Omaha, and Saint Anselm College in New Hampshire, and the School of Criminology and Justice Studies at the University of Massachusetts, Lowell, where he taught for 27 years; he is now a professor emeritus, still teaching online courses in criminology and criminal justice. Dr. Siegel has written extensively in the area of crime and justice, including books on juvenile law, delinquency, criminology, criminal justice, and criminal procedure. He is a court-certified expert on police conduct and has testified in numerous legal cases. The father of four and grandfather of three, Larry Siegel now resides in Naples, Florida, with his wife, Terry, and their two dogs, Watson and Cody..