Items related to Wild Democracy: Degrowth, Permaculture, and the Simpler... 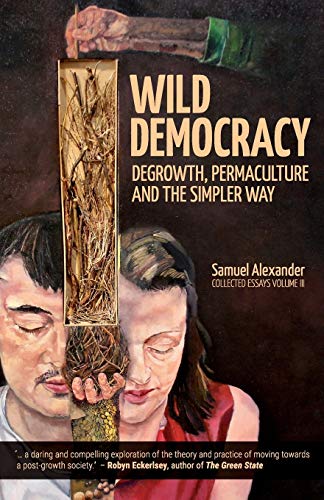 Book Description Simplicity Institute, United States, 2017. Paperback. Condition: New. Language: English. Brand new Book. 'Wild Democracy is a daring and compelling collection of essays that explores the theory and practice of moving towards an equitable, post-growth society, and defends an alternative, post-consumerist account of human flourishing. Thoreau believed that 'in wildness lies the preservation of the world' and Samuel Alexander has shown us how we do this in our backyards, our local communities and our everyday practices. He has done Thoreau proud.'- Robyn Eckersley, author of 'The Green State: Rethinking Democracy and Sovereignty' 'Building bridges between different schools of thought, Samuel Alexander outlines an alternative to the nightmare of a growth society racing towards collapse, articulating various post-capitalist approaches, between anarcho-marxism, wild democracy and spirituality. In doing so this book attempts to overcome the old divide between reformism and revolution.'- Serge Latouche, author of 'Farewell to Growth' 'Wild Democracy: Degrowth, Permaculture, and the Simpler Way' is Samuel Alexander's third volume of collected essays, following the publication of 'Prosperous Descent: Crisis as Opportunity in an Age of Limits' (2015) and 'Sufficiency Economy: Enough, for Everyone, Forever' (2015). He is also author of 'Deface the Currency: The Lost Dialogues of Diogenes' (2016), 'Just Enough is Plenty: Thoreau's Alternative Economics' (2016), and 'Entropia: Life Beyond Industrial Civilisation' (2013), as well as being editor of 'Voluntary Simplicity: The Poetic Alternative to Consumer Culture' (2009) and co-editor of 'Simple Living in History: Pioneers of the Deep Future' (2014) and 'Words for Awakening: Voices of Inspired Revolt' (2017). For more details see: www.samuelalexander.info. Seller Inventory # AAV9780994160676