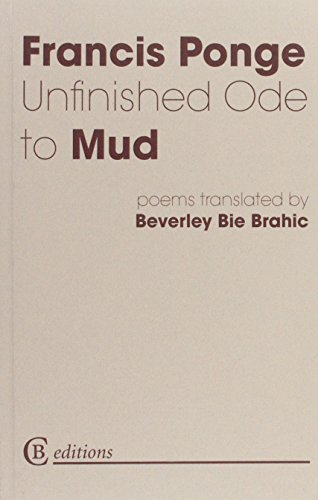 Ponge s vision is painstakingly matter-of-fact, and herein lies his strength as a poet: in this commonplace vision, coupled with a refusal to be poetic and a scientific-like examination of language, lurks a breathtaking sense of wonder . . . Beverley Bie Brahic s translation is wholly in keeping with Ponge s own premiss that he should never sacrifice the object of [his] study to enhance some verbal turn discovered on the subject . These new translations never interfere with Ponge s vision, and things do not lose their thingness. We can be grateful to both the translator and CB editions for bringing back the unique work of Francis Ponge to the attention of English-speakers.
Lee Rourke, Times Literary Supplement

He s a writer who makes you feel like writing and that s really about as noble an end to writing as there can be . . . Unfinished Ode to Mud is the first parallel text version of Ponge's work I have come across. The numerous American editions I've enjoyed and consulted in the past have presented the translations only. This is an act of generosity as well as bravery . . . The directness and simplicity of Brahic s translation are refreshing, and to finally see such previously untranslated works as the titular ode is a great thing indeed. --Luke Kennard, Poetry London

Francis Ponge, born in Montpellier in 1899, began writing prose poems in the 1920s, though his first collection was not published until 1942. He joined the Communist Party in 1937 (he left it in 1947) and was active in the Resistance during World War Two. In the late 1950s his work was praised by Sartre and Camus, and he collaborated with painters such as Picasso, Braque and Dubuffet. He died in 1988