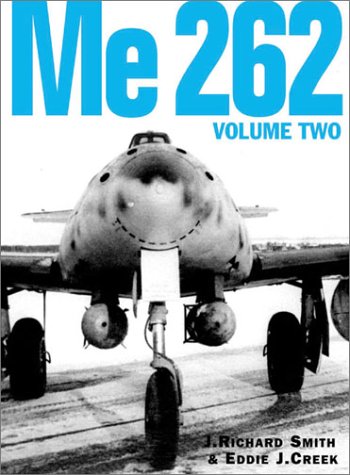 In this, the second volume of their unprecedented study of the Messerschmitt Me262, internationally renowned authors J. Richard Smith and Eddie J. Creek have drawn on more than 30 years of unrivaled research to continue the story of the world's first operational military jet aircraft. Using the frank and concise personal reports of Messerschmitt's front-line inspectors, as well as combat reports and other eye-witness accounts, the authors reveal the later tactical successes and failures of the aircraft as it was initially deployed in both the fighter role with Kommando Nowotny and in the bomber role with Kommando Schenk and KG51 over the western front in the autumn of 1944. Also included is an in-depth look at the array of ingenious and formidable weapons systems designed for the aircraft as well as detailed descriptions of the projected rocket-powered interceptor, BMW-engine, and heavily armed and armored variants. With 370 photographs - many never before published - together with more than 30 high-precision technical scale drawings plus 30 full-color interpretations and biographies of many of the military personalities associated with the early operations of the aircraft, this study is unquestionably the most comprehensive account of the Me262 ever written. It will be an essential requirement for those interested in early jet craft development and military aviation history.

J. Richard Smith is undisputedly one of the world's foremost authorities on the history of the Luftwaffe. His works include the landmark publication Jet Planes of the Third Reich as well as Arado 234 Blitz, Luftwaffe Camouflage & Markings 1935-45, Me262 and numerous other leading aviation titles. He is a former specialist in the business training sector, having worked for a national telecommunications company.