Items related to The Culture of Bruising: Essays on Prizefighting, Literature...

The Culture of Bruising: Essays on Prizefighting, Literature, and Modern American Culture 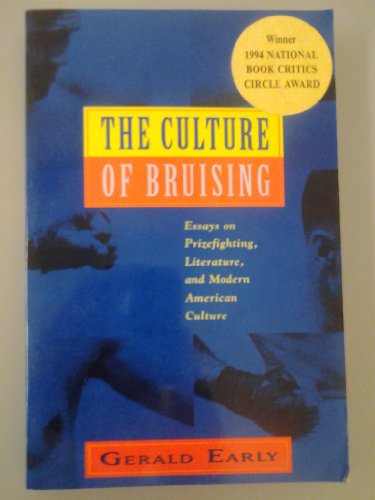 "An essay must do more than say something," writes Gerald Early; "It must be something in its own right." The Culture of Bruising is Gerald Early's long-awaited sequel to his award-winning first volume of essays Tuxedo Junction and, in the same spirit, he explores not only a variety of subjects but the form of the essay itself.
Early's cultural ruminations on the sport of prize-fighting form the intellectual core and central metaphor of this book. That is to say, his subject, when writing about boxing, is not just the culture of bruising or the world of the prizefighter but rather the culture as bruising - as a structure of opposition against the individual.
Early's subjects range far and wide - essays in which he shares with us his considerable insights and expertise on such various subjects as multiculturalism and Black History Month, baseball, racist memorabilia, performance magic and race, Malcolm X, early jazz music, and finally, the raising of daughters. In every essay the form strengthens the content and gracefully balances the elements of research and opinion. Early becomes by turns the critic, skeptic, autobiographer, biographer, storyteller, cultural and literary scholar, detached citizen, and bemused parent. He integrates these voices with the skill of an accomplished choirmaster.
The Culture of Bruising is an important and captivating collection of essays that treats issues of justice and racism in the context of sports, music, and other activities Americans value most. Early is a vigilant and highly sensitive observer of our culture, a culture based on the paradoxical combination of self-destruction and violence with personal empowerment and triumph.

1. The Culture of Bruising: Essays on Prizefighting, Literature, and Modern American Culture

2. The Culture of Bruising: Essays on Prizefighting, Literature, and Modern American Culture