Items related to Essays in History & Philosophy of Science

Essays in History & Philosophy of Science 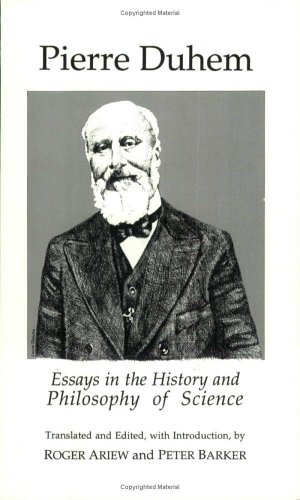 Here, for the first time in English, are the philosophical essays - including the first statement of the "Duhem Thesis" - that formed the basis for Aim and Structure of Physical Theory, together with new translations of the historiographical essays presenting the equally celebrated "Continuity Thesis" by Pierre Duhem (1861-1916), a founding figure of the history and philosophy of science. Prefaced by an introduction on Duhem's intellectual development and continuing significance, here as well are important subsequent essays in which Duhem elaborated key concepts and critiqued such contemporaries as Henri Poincare and Ernst Mach. Together, these works offer a lively picture of the state of science at the turn of the century while addressing methodological issues that remain at the center of debate today.

This volume assembles twelve texts published between 1892 and 1915 . . . . The editors allow one to see the genesis of the ideas of Duhem, philosopher and historian, of the variety of his styles, and sometimes also the limits of his work . . . . A useful index, probably unique in the field of Duhemian studies, completes the book . . . . The English-language public may be assured an exemplary translation and a reliable critical apparatus. --Jean Gayon, "Revue d'Histoire des Sciences"

Roger Ariew is Professor of Philosophy, University of South Florida.

1. Essays in History and Philosophy of Science

Book Description Hackett Pub Co Inc, 1996. Paperback. Condition: Fair. 100% satisfaction guaranteed! We ship quicklyA great value based option. May have used stickers. May show moderate to heavy wear or use. Highlighting/Underlining/Margin Notes may be present. Does Not include codes, CDs/DVDs, or other supplementals. All pages present and legible.Missing Dust Jacket. Seller Inventory # CKY400719141

2. Essays in History and Philosophy of Science

3. Essays in the History and Philosophy of Science

4. Essays in History and Philosophy of Science

Book Description Hackett Pub Co Inc, 1996. Condition: Good. A+ Customer service! Satisfaction Guaranteed! Book is in Used-Good condition. Pages and cover are clean and intact. Used items may not include supplementary materials such as CDs or access codes. May show signs of minor shelf wear and contain limited notes and highlighting. Seller Inventory # 0872203085-2-4