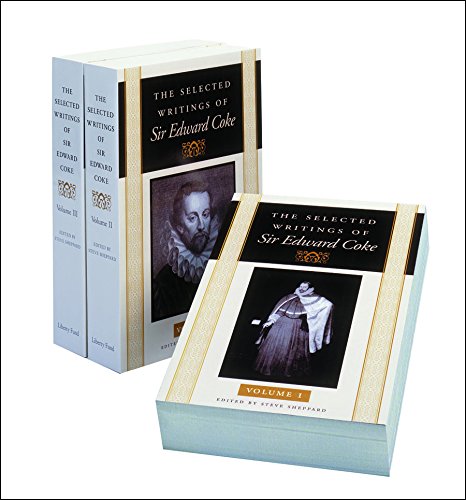 Sir Edward Coke (1552-1634) successfully defended English liberties against the royal prerogative of the Stuart kings and virtually single-handedly established the rule of law for the English-speaking peoples. Coke's view of English law has had a powerful influence on lawyers, judges, and politicians through the present day.

It was Coke's astonishing task to set down the whole of the law--from Magna Carta to land law to criminal law, and the system of court procedure, from the High Court of Parliament down to the lowest courts of the realm--for students, lawyers, and laymen to understand it. The Institutes derived their authority not only from Coke's personal influence but also, in part, from the great authority accorded the Reports, which themselves solidified the modern understanding of case law.

The Liberty Fund edition of The Selected Writings of Sir Edward Coke is the first anthology of his works ever published.

Steve Sheppard is Associate Dean for Research and Faculty Development and the William H. Enfield Distinguished Professor of Law at the School of Law, University of Arkansas.

The Selected Writings of Sir Edward Coke in three volumes, edited by Steve Sheppard, is a welcome addition, and provides a rich and full selection of the writings of Coke, who established the rule of law and defined Common Law by defending the "traditional liberties" of the English people from the abuses of power (including the king's) and by writing down the English laws and court procedure. Sheppard has done a splendid job of making Coke's writings available and accessible, providing headnotes, a general "Introduction", and an extensive "Chronology of Events" that includes Coke's legacy. There are ample selections from Coke's Reports (including the case de Libellis Famosis establishing libel law), and from all four parts of Coke's Institutes, including the entire discussion of the Magna Charta. The third volume includes fascinating discussions of heresy, treason, and "Of Felony by Conjuration, Witchcraft, Sorcery, or Inchantment." As a companion to this edition, Liberty Fund has also published Law, Liberty, and Parliament: Selected Essays on the Writings of Sir Edward Coke, edited by Allen D. Boyer, which reprints essays on Coke published during the twentieth century, including the chapter in Helgerson's Forms of Nationhood (1992).

Studies in English Literature 1500-1900
Winter 2005
When it came to British law, Coke (1552-1634) was akin to a force of nature. In addition to his duties in Parliament as Speaker of the House, it fell to Coke to write down all of British law for academic study. He also was the power behind numerous laws that ended abuses of citizens by the crown; many of his ideas were incorporated into the U.S. Constitution. This three-volume set offers a large selection of his writings for a very reasonable price.

Library Journal
April 15, 2004
The common law of England, unless repugnant to the Constitution or altered by the General Assembly, has been adopted in §1-10 of the Code of Virginia. The common law is derived from decisions, customs and usage over time "whereof the memory of man runneth not to the contrary." Enmeshed in the mists of history, the Virginia Supreme Court has cited both Edward Coke and William Blackstone as primary sources.

Edward Coke (1552-1634) is the first great expositor of the common law. Coke possessed undeniable stature in his career as solicitor general, attorney general, speaker of the House of Commons and lord chief justice. His professional career straddled the reigns of Queen Elizabeth and King James, when England made the transition from a feudal to commercial society. The widespread development in printing allowed Coke's influence to eclipse the writings of his predecessors, John Fortescue and Thomas Littleton.

With the publication of Selected Writings, Liberty Fund has provided ready access to Coke. Volume 1 begins with fifty-eight cases between 1600-1615, starting with that most notable to first-year law students, "Shelley's Case." Coke's collection and publication of cases during his lifetime contributed to regularity in the law and laid a solid foundation for judge's decisions based on established precedent.

Volume II of Selected Writings contains extracts from his four-part "Institutes on the Lawes of England" and were based largely in name on Justinian's "Institutes," a studious recurrence to the Roman basis of English civil law. The first part was subtitled "Coke upon Littleton" and was his attempt to update Littleton's treatise on real property. The next three parts of Coke's "Institutes" contained in Volume II dealt respectively with statutes, crimes and courts.

It is Coke's "Institutes" that provide his most enduring legacy. Legal education of Colonial Virginians rested on Coke, and the popular understanding of the meaning of common law was a function of his "Institutes." Coke's assertion of Magna Carta and the ancient constitution as binding on the prerogatives of the king had a particular resonance at our revolution. Those martyred heroes of English liberty--John Hampden and Algernon Sydney--based their arguments on Coke no less than did George Mason and Thomas Jefferson.

Volume III of Selected Writings contains Coke's speeches. His willingness to bind the king to the law was a source of obvious conflict, and James, citing Coke's perpetual turbulent carriage," removed him as lord chief justice in 1616. Most of the speeches in Volume III follow his removal and concentrate on the defense of liberties. His speeches related to the Petition of Right, in 1628, are particularly critical to the intellectual underpinnings of American independence.

Selected Writings is ably edited by Steve Sheppard, who is a law professor at the University of Arkansas. Sheppard's prior works include The History of Legal Education in the United States (1999) and American Law: The Basics in Global Prospective (2003). An historian's prospective is evident in the annotations, notes and extensive chronology. Researchers who come across ancient English statutes without calendar dates will find the table of regnal years especially valuable.

Deference to well-established tradition has been a noted characteristic of the law of Virginia. Present §1-10 has its origins--and some of its language--in an act of the General Assembly passed during May of 1776. The Supreme Court of Virginia, as recently as January of 2004, reaffirmed that an act in derogation of the common law will be strictly construed. The Selected Writings of Sir Edward Coke provides the modern practitioner an insightful and definitive resource on our common-law inheritance.

Thomas M. Moncure, Jr.
Virginia Lawyer
April 2004
. . .the reader of Sheppard's version of Coke is startled to see that the basic problems of jurisprudence--the conflict between efficiency and equity; the mystifying nature of the legal doctrines that try to allow for multiple human purposes; the difficulty of separating public and private, secular and spiritual, freedom and responsibility--were essentially the same in Coke's day as they are in ours. Coke himself was not a particularly modest man, and he occasionally got slapped down when he put on airs. . . .And yet, the basic theme in all his writing is that one ought to be somewhat humble before the majesty of the law itself: a law divine in inspiration and, in application, supremely wise. Whatever he was like in person, certain humility (admittedly, some of it a bit forced) emanates from his treatises, reports, and speeches. He understood, as did Burke, that individually, men are foolish, selfish, and irrational; the species (or at least its great judges, lawyers, and treatise writers of the common law) collectively is wise, however, and ignored at one's peril.

A reading of these volumes shows the strong debt we owe to Coke for the basic principles of American constitutionalism: a government of laws, not men; the necessity for strong reasons even for legislators to depart from preexisting rules, while courts never should; the responsibility of the courts truly to limit legislatures and of executives to act only in accordance with the fundamental law (for Coke "the common law"; for us, the Constitution); reservation of the power to tax to the people's representatives; and the indispensability (as our Framers understood and as Alexander Hamilton, George Washington, and others frequently expressed) of law to order, morality to law, and religion to morality. Coke's world, of course, was not ours--no longer do we have the monarch or the hereditary aristocracy he sought to accommodate as well as to contain. Even so, the need for the courts and other governmental actors to be bound by the rule of law--the need to avoid the acts of arbitrary power--is as profound in our day as it was in Coke's.

The Selected Writings of Sir Edward Coke contains the most important works of the great English jurist-politician who set out to codify English common law. In his Reports, which are reports of court proceedings, and his Institutes, which state the law, Coke set down a view of English law that has had a powerful influence on lawyers, judges, and politicians through the present day. Liberty Fund's Selected Writings of Sir Edward Coke includes not only selections from the four volumes of the Institutes and cases from the Reports, but also several of Coke's speeches in Parliament, Coke's opinions from the bench, and opinions of Coke as recorded by others from official cases and court records. Taken together, these writings delineate the origin and nature of English law and indicate the profound interrelationship in the English tradition of custom, common law, authority (of both Crown and Commons), and individual liberty.

4. The Selected Writings And Speeches Of Sir Edward Coke