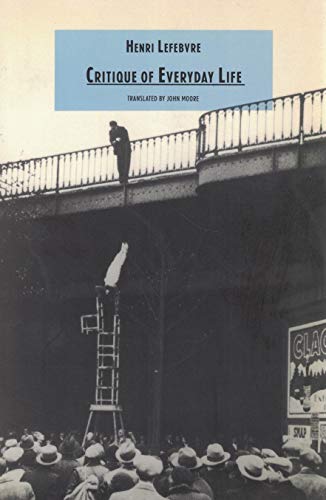 The Critique of Everyday Life is perhaps the richest, most prescient work of one of this century's greatest philosophers. A historian and sociologist, Lefebvre developed his ideas over seven decades through intellectual confrontation with figures as diverse as Bergson, Breton, Sartre, Debord and Althusser. In turn, these ideas had a considerable influence on the most defiantly utopian political movements of recent years. Written at the birth of post-war consumerism, though only now translated into English, the Critique is a book of enormous range of subtlety. Lefebvre takes as his startling-point and guide the 'trivial' details of quotidian experience: an experience colonized by the commodity, shadowed by inauthenticity, yet which remains the only source of resistance and change. Whether he is exploring the commercialization of sex or the disappearance of rural festivities, analysing Hegel or Charlie Chaplin, Lefebvre always returns to the ubiquity of alienation, the necessity of revolt. This is an enduringly radical book, untimely today only in its intransigence and optimism.

"Henri Lefebvre was the last great classical philosopher. His career was distinguished by this feature - rare enough even in the most productive creative lives - namely, to have had a new idea every decade. The concept of 'everyday life' was one of [his] ideas: now that it has been fruitfully disseminated through any number of thought modes, from cultural studies to the new urbanism, it behoves us to return to the source, in this first, prophetic postwar statement." - Frederic Jameson