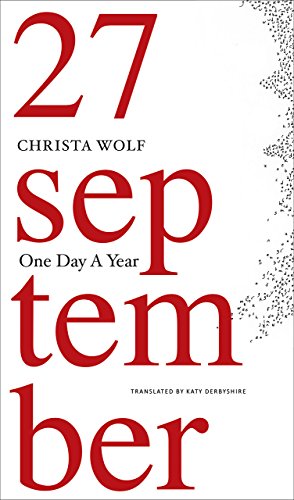 During a 1960 interview, East German writer Christa Wolf was asked a curious question: would she describe in detail what she did on September 27th? Fascinated by considering the significance of a single day over many years, Wolf began keeping a detailed diary of September 27th, a practice which she carried on for more than fifty years until her death in 2011. The first volume of these notes covered 1960 through 2000 was published to great acclaim more than a decade ago. Now translator Katy Derbyshire is bringing the September 27th collection up to date with One Day a Year a collection of Wolf's notes from the last decade of her life. The book is both a personal record and a unique document of our times. With her characteristic precision and transparency, Wolf examines the interplay of the private, subjective, and major contemporary historical events. She writes about Germany after 9/11, about her work on her last great book City of Angels, and also about her exhausting confrontation with old age. One Day a Year is a compelling and personal glimpse into the life of one of the world's greatest writers.

Christa Wolf's (1929 2011) other works include the ground-breaking Cassandra, Patterns of Childhood and The Quest for Christa T. She has been awarded many prizes, among them the Buchner Prize of the German Academy of Language and Poetry the Austrian State Prize for European Literature and the Geschwister Scholl Prize of the city of Munich. Katy Derbyshire is a London-born translator who has lived in Berlin for many years. Her translations of Jan Brandt's Against the World, Inka Parei's Shadow-Boxing Woman, What Darkness Was, and The Cold Centre, and Dorothee Elmiger's Invitation to the Bold of Heart are also published by Seagull Books.