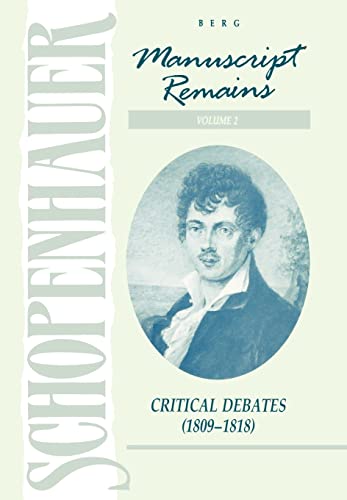 The Manuscript Remains contain Schopenhauer's entire surviving philosophical notes from his university years till his death in 1860. The historico-critical edition, on which the English-language edition is based, was first published 1966 to 1975 under the auspices of Arthur Hubscher, president of the Schopenhauer's works. His greatest achievement is to have edited the manuscript remains in such a way as to offer a readable version which contains helpful extensive introductions, notes and indexes.

Arthur Hubscher is president of the Schopenhauer Society and director of its archives.

Book Description Berg Publishers, 2020. Hardback. Condition: NEW. 9780854965397 This listing is a new book, a title currently in-print which we order directly and immediately from the publisher. Print on Demand title, produced to the highest standard, and there would be a delay in dispatch of around 10 working days. For all enquiries, please contact Herb Tandree Philosophy Books directly - customer service is our primary goal. Seller Inventory # HTANDREE0150918