Items related to Soviet Warships: The Soviet Surface Fleet 1960 to the...

Soviet Warships: The Soviet Surface Fleet 1960 to the Present 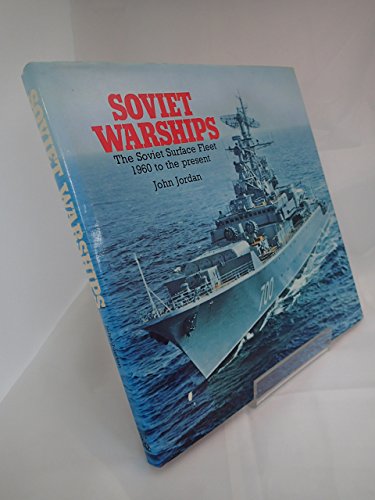 Soviet Warships: The Soviet Surface Fleet 1960 to the Present

1. SOVIET WARSHIPS: THE SOVIET SURFACE FLEET 1960 TO THE PRESENT.

Book Description Arms and Armour, London, 1983. Hard Cover. Condition: Very Good+. Dust Jacket Condition: Very Good. 128 pp, large 8vo (9 7/8" H). "(P)rovides a detailed analysis of the new generations of Soviet surface warships - from the Kynda class guided missile carriers of the 1960s to the new nuclear-powered battlecruiser 'Kirov'. It provides a refreshing, alternative view to the usual over-reactive reading of Soviet naval intentions. Recent Soviet naval developments are viewed here not as an attempt to win control of the sea, but as a persistent drive to counter western sea-power as a force capable of threatening Soviet territory. The major classes of Soviet surface ships covered are Kynda, Kashin, Kresta I, Moskva, Kresta II, Krivak, Kara, Kiev, Kirov and the new destroyers 'Sovremenny' and 'Udaloy', each of which has a chapter devoted to it. Complete details of each class are given including design, construction, service career, propulsion, weapons and radar. The strategic thinking behind each new concept is examined, the design shortcomings of each type discussed, and their operational capabilities assessed. In addition to over 150 superb b&w photographs, line drawings of each class are provided with details of fittings and armament. There are also over 30 tables of ship specifications, missiles, guns and aircraft carried by each class. The book is rounded off by Appendices of Soviet ship classification and NATO designations for Soviet equipment." Tiny dint on rear board. Dust jacket has been price-clipped, has light rubbing, light edge wrinkling - mainly at top/bottom of spine and flap-folds, two tiny edge tears, very small ghost sticker mark on front flap. Seller Inventory # 25227

3. Soviet warships: The Soviet surface fleet 1960 to the present

4. Soviet Warships: The Soviet Surface Fleet 1960 to the Present

Book Description United Kingdom, London, 1983. Paperback. Condition: Very Good. The book has been read, but is in excellent condition. Pages are intact and not marred by notes or highlighting. The spine remains undamaged. Seller Inventory # GOR005749759

5. Soviet Warships: The Soviet Surface Fleet 1960 to the Present