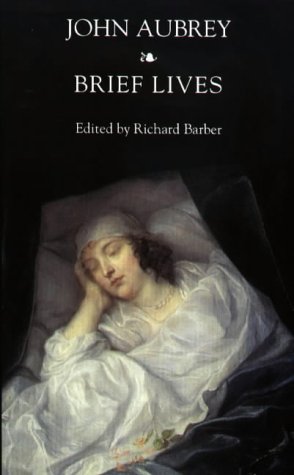 John Aubrey's racy portraits of the great figures of 17th-century England stand alongside Pepys's diary as a vivid evocation of the period. Aubrey was born in 1626, the son of a Wiltshire squire; at the age of 26 he inherited a family estate encumbered with debt, and finally went bankrupt in the 1670s. From then on he led a sociable, rootless existence at the houses of friends - from Oxford and the Middle Temple -pursuing the antiquarian studies which had always obsessed him. At his death in 1697 he left a mass of notes and manuscripts, among them the material for Brief Lives. He never managed to put even a single life into logical order; all we have are the raw materials, scribbled down -'tumultuously as they occurredto my thoughts'. With this full, modern English edition, which reproduces Aubrey's words as closely as possible, Richard Barber introduces us to Aubrey and his world, tells how the Livescame into being and enables many new readers to enjoy this eccentric masterpiece.