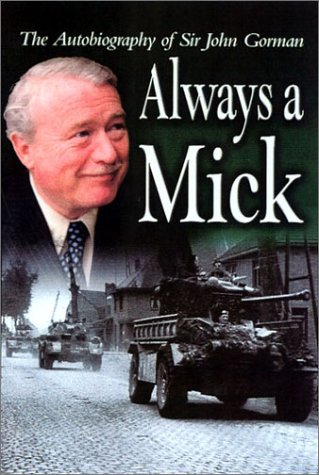 After serving in the Irish Guards in NW Europe (where he won a legendary MC for ramming a King Tiger tank), John Gorman's career included being Head of Security with BOAC, and closely involved with Royal visits. Later he was Europe's largest landlord running the Northern Ireland Housing Executive. before entering politics and becoming Deputy Speaker of the Northern Ireland Assembly. Sir John Gorman exudes relaxed charm, humour and impeccable style. This book mirrors all these enviable characteristics and makes for a thoroughly enjoyable and entertaining read.

Sir John Gorman has an incredible story to tell. He served with the Irish Guards in North West Europe, winning the MC for ramming and knocking-out a Royal Tiger tank; the thickness of its armour precluded any other alternative! After the War he followed his father into the Royal Ulster Constabulary - not the normal choice of career for a Roman Catholic. He was 'head-hunted' to join BOAC as head of Security. His duties was accompanying HM The Queen on Royal visits overseas. He rose to run the airline's operations in Canada before being invited to head the Northern Ireland Housing Executive, the largest landlord in Europe at a very sensitive time. A man of immense energy and charm, he progressed to becoming a Member and Deputy Speaker of the Northern Ireland Legislative Assembly, despite being 79. Like so many of his Countrymen, Sir John tells a tremendous story with disarming honesty and great good humour.

Sir John Gorman's career and achievements have been recognised by his knighthood, Companionship of the Victorian Order and British Empire, Military Cross and his appointment as a Deputy Lieutenant. He lives in County Down.

1. Sir John Gorman: The Times of My Life

2. Sir John Gorman: The Times of My Life

Book Description Pen & Sword Books Ltd, 2002. Hardcover. Condition: Very Good. Very Good: a copy that has been read, but is in excellent condition. Pages are intact and not marred by notes or highlighting. The spine remains undamaged. Most items will be dispatched the same or the next working day. Seller Inventory # wbb0014879049

Book Description Hardback. Condition: Very Good. The book has been read, but is in excellent condition. Pages are intact and not marred by notes or highlighting. The spine remains undamaged. Seller Inventory # GOR001134780

6. Sir John Gorman: The Times of My Life

Book Description Pen and Sword 2003-03-19, 2003. Hardcover. Condition: Good. No Jacket. Item is in good condition. Some moderate creases and wear. This item may not come with CDs or additional parts including access codes for textbooks. This may not have a dust jacket. Might be an ex-library copy and contain writing/highlighting. Photos are stock pictures and not of the actual item. Seller Inventory # DS-0850529069-3

9. Sir John Gorman: The Times of My Life

10. The Times of My Life - an Autobiography - Sir John Gorman

Book Description Leo Cooper, London (2002), 2002. Hardcover. Condition: Collectible, Fine. Dust Jacket Condition: Near Fine. SIGNED by author, Gorman, on endpaper, dated 26-11-02. Octavo, hardcover, fine in near fine black and orange pictorial dj. First edition, first printing. 228 pages plus 16 pages of B&W photographs. Thoroughly entertaining autobiography of John Gorman, who won the Military Cross while serving in the Irish Guards for ramming a German King Tiger tank. He joined the RUC after the war before being headhunted by BOAC as Head of Security. He then became Europe's largest landlord, running the Northern Ireland Housing Executive, before successfully standing for the Irish Legislative Assembly and being selected as Deputy Speaker by his peers. The story of a quite amazing life. Seller Inventory # 70916