Items related to The Army of Northern Virginia (Men-at-Arms)

The Army of Northern Virginia (Men-at-Arms) 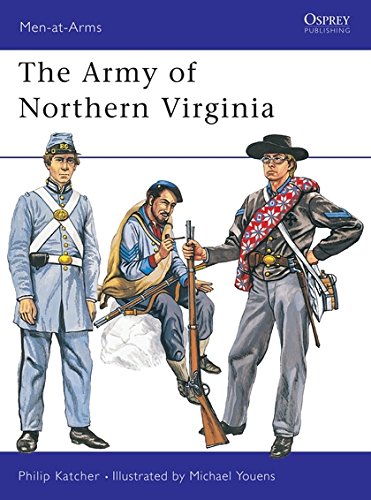 On the 27 June, 1862, with the American Civil War already a year old, General Robert E. Lee assumed personal command of troops engaged in driving the Federal Army of the Potomac out of Richmond - troops which would henceforth be known as The Army of Northern Virginia. Philip Katcher explores in absorbing detail all aspects of the army, including infantry, cavalry, artillery, technical and medical corps, paying particular attention to equipment, weapons and uniforms. Contemporary and museum photographs, together with the author's expert text, combine to a paint a vivid and accurate picture of what life was like for the average confederate soldier.

"When one picks up Philip Katcher's "The Army of Northern Virginia, Lee's Army in the American Civil War, they will become excited... Mr. Katcher immediately makes his participation known, as he is a very accomplished historian... The reader will find jewels of information not common elsewhere.... Like a seamstress who can make a beautiful quilt out of many pieces of cloth, Katcher creates a combination of many period quotes, actual pictures and modern visuals resources to accomplish his goal... ."-"The Watchdog, Winter 2004

Otto von Pivka (the nom de plume of Digby Smith) wrote his first title for Osprey Publishing in 1972 (The Black Brunswickers, in the Men-at-Arms series). He is a prolific author, who has contributed many titles to the Men-at-Arms series on the armies and forces of the Napoleonic Wars. A former major in the British Army, he is now retired, but continues to write books on this key period.

1. The Army of Northern Virginia (Men at Arms Series, 37)