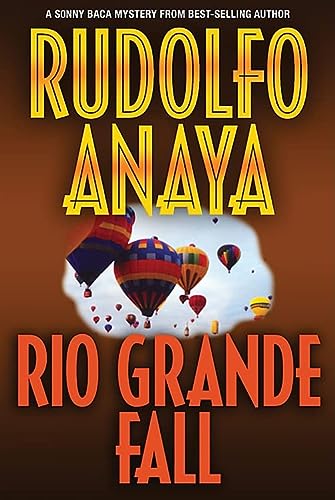 When a woman dies after falling from a hot-air balloon at Albuquerque's world-famous balloon fiesta, private investigator Sonny Baca's intuition tells him it's murder. His intuition also tells him that the murder is the work of the Raven, the leader of a violent cult that murdered Sonny's cousin, and a man Sonny thought he'd killed. The murder jeopardizes the millions of tourist dollars connected with the fiesta, but Sonny knows the Raven has more on his mind than simple mayhem. This is a completely entertaining mystery novel, but Anaya actually offers two parallel lands of enchantment. One is temporal New Mexico; the other is Nuevo Mexicano, a land of santos, milagros, spirits, visions, and even brujas (witches). It's a land of old ways, old values, and old wisdom. And it's a land where small farms and multigenerational families are fast being wiped out by modernity. - Booklist

Rudolfo Anaya has received numerous awards, including the Premio Quinto Sol, the national Chicano literary award, the National Medal of Arts for literature, the PEN Center West Award for Fiction, the American Book Award from The Before Columbus Foundation, the Mexican Medal of Friendship from the Mexican Consulate, and the Western Literature Association's Distinguished Achievement Award. Other Rudolfo Anaya fiction titles available from UNM Press include Alburquerque, Curse of the ChupaCabra, Jemez Spring, Zia Summer, Cuentos Chicanos, Heart of Aztlan, Serafina's Stories, Tortuga, and two children's picture books, The Santero's Miracle and The First Tortilla.