Items related to Punishing the Poor: The Neoliberal Government of Social... 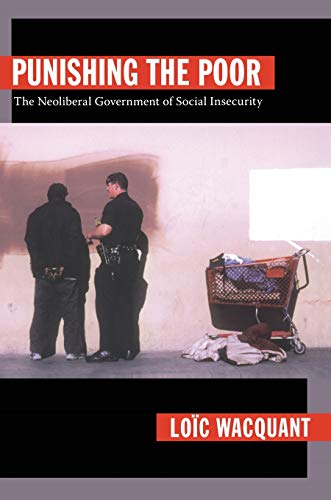 The punitive turn taken by penal policies in advanced societies over the past two decades does not pertain to the traditional duo of crime and punishment. Rather, it heralds the establishment of a new government of social insecurity aimed at molding the conduct of the men and women caught in the turbulence of economic deregulation and the conversion of welfare into a springboard toward precarious employment. Within this 'liberal-paternalist' apparatus, the prison has recovered its original mission: to tame the populations and the territories rebellious to the emerging economic and moral order, and to ritually reassert the fortitude of the rulers. It is in the United States that this new politics and policy of marginality wedding restrictive 'workfare' and expansive 'prisonfare' was invented, in the wake of the social and racial reaction of the 1970s that was the crucible of the neoliberal revolution. "Punishing the Poor" takes the reader inside America's prison to probe the entrails of the bulimic carceral state that has risen on the ruins of the charitable state and the black ghetto. It demonstrates how, in the era of fragmented labor, the regulation of the lower classes no longer involves solely the maternal arm of the social-welfare state, but crucially implicates the stern and virile arm of the penal state. And it explains why the battle against crime is both a reaction to, and a diversion from, the new social question: namely, the generalization of insecure work and its impact on the life spaces and strategies of the urban proletariat. By uncovering the material underpinnings and unhinging the symbolic springs of the law-and-order reason that is now sweeping through the countries of the First and Second worlds, this bold book linking social and penal policies makes an original contribution to the historical anthropology of the state in the age of triumphant neoliberalism.

"This powerful book shows that America's harsh penal policies are of a piece with harsh social policies and that both can be understood as a symbolic and material apparatus to control the marginal populations created by neoliberal globalization. A tour de force!" --Frances Fox Piven, co-author of Regulating the Poor: The Functions of Public Welfare

"Boldly conceived and carefully constructed the book details the grandeur of a penal state resourced by the plundering of the social one and dissects the attitudes that legitimate it in all its grandeur. Moreover, Wacquant not only chronicles the enthronement of the penal state in the US but also its imitative climb towards ascendancy in Western Europe...The cityscape he surveys is as ruptured and ill-lit as an urban earthquake, but his gaze is clear and steady...Urgent and timely, absorbing and alarming, Punishing the Poor should warn us that Britain's increasing dependence on our penal state and the accelerating erosion of our social state are one and the same thing, and may prove a disaster." --TIMES HIGHER EDUCATION BOOK OF THE WEEK Louise Hardwick, Times Higher Education, 6th August 2009

Loïc Wacquant is Professor of Sociology at the University of California, Berkeley, and Researcher at the Centre de sociologie européenne, Paris. He is a MacArthur Foundation Fellow and recipient of the 2008 Lewis Coser Award of the American Sociological Association. His recent books include Urban Outcasts: A Comparative Sociology of Advanced Marginality, Body & Soul: Notebooks of an Apprentice Boxer, and Pierre Bourdieu and Democratic Politics. He is a co-founder and editor of the interdisciplinary journal Ethnography.

1. Punishing the Poor - The Neoliberal Government of Social Insecurity

2. Punishing the Poor: The Neoliberal Government of Social Insecurity (Paperback)

Book Description Duke University Press, United States, 2009. Paperback. Condition: New. Language: English. Brand new Book. The punitive turn of penal policy in the United States after the acme of the Civil Rights movement responds not to rising criminal insecurity but to the social insecurity spawned by the fragmentation of wage labor and the shakeup of the ethnoracial hierarchy. It partakes of a broader reconstruction of the state wedding restrictive "workfare" and expansive "prisonfare" under a philosophy of moral behaviorism. This paternalist program of penalization of poverty aims to curb the urban disorders wrought by economic deregulation and to impose precarious employment on the postindustrial proletariat. It also erects a garish theater of civic morality on whose stage political elites can orchestrate the public vituperation of deviant figures-the teenage "welfare mother," the ghetto "street thug," and the roaming "sex predator"-and close the legitimacy deficit they suffer when they discard the established government mission of social and economic protection. By bringing developments in welfare and criminal justice into a single analytic framework attentive to both the instrumental and communicative moments of public policy, Punishing the Poor shows that the prison is not a mere technical implement for law enforcement but a core political institution. And it reveals that the capitalist revolution from above called neoliberalism entails not the advent of "small government" but the building of an overgrown and intrusive penal state deeply injurious to the ideals of democratic citizenship.Visit the author's website. Seller Inventory # AAJ9780822344223

3. Punishing the Poor: The Neoliberal Government of Social Insecurity (Paperback or Softback)

4. Punishing the Poor: The Neoliberal Government of Social Insecurity

6. Punishing the Poor: The Neoliberal Government of Social Insecurity

Book Description Duke University Press. Paperback / softback. Condition: New. New copy - Usually dispatched within 4 working days. A sociologist explains how over the past two decades neoliberal societies have sought to control the poor through a combination of penal sanction and welfare supervision. Seller Inventory # B9780822344223

8. Punishing the Poor: The Neoliberal Government of Social Insecurity

10. Punishing the Poor: The Neoliberal Government of Social Insecurity (Politics, History, and Culture)