Items related to Barbarians Inside the Gates--and Other Controversial... 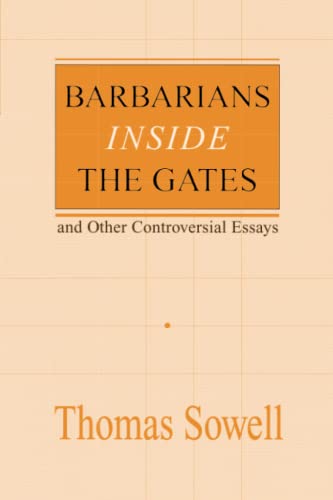 A collection of essays that discusses such issues as the media, immigration, the minimum wage and multiculturalism.

Insights on the critical issues facing America today
In this latest collection of his always provocative essays, Thomas Sowell once again demonstrates why he is one of the most thoughtful, readable, and controversial thinkers of our time. With his usual unrelenting candor, Sowell cuts through the stereotypes, popular mythology, and "mush" surrounding the critical issues facing our nation today. Combining reason and common sense with actual historical and statistical evidence, he challenges the assumptions of those cultural and political elites he calls "the anointed"--those who are "presuming or pretending to know answers that could be applied through government programs"--and offers a hard-hitting perspective that is uniquely his own.

Whether he is writing about the media, multiculturalism, or Louis Farakhan, Sowell assails the fallacies of both the left and the right as he strives to reform not merely policies but our entire way of thinking. His ruthlessly honest insights on the American social, economic, political, legal, racial and education scenes include his opinions on cultural "identity," prayer in schools, affirmative action, immigration, the litigation explosion, the social security crisis, the minimum wage, the media, racial quotas, personal responsiblity, cultural bias, Clarence Thomas and Anita Hill, Wade versus Roe, gays in the military, the death penalty, and many more of the most important issues facing America today. Sowell tackles each of these topics with a bold, original approach that demolishes widely held views and forces everyone, even those who disagree, to stop and think. A noted author and economist, Thomas Sowell is a senior fellow at the Hoover Institution on War, Revolution and Peace.

Thomas Sowell is the Rose and Milton Friedman Senior Fellow on Public Policy at the Hoover Institution, Stanford University. Among his published works are Basic Economics, Late Talking Children, and Race and Culture. He has also published in both academic journals and the popular media including Newsweek, Forbes, the Wall Street Journal, and 150 newspapers that carry his nationally syndicated column.

1. Barbarians inside the Gates and Other Controversial Essays (Paperback)

2. Barbarians Inside the Gates: And Other Controversial Essays

3. BARBARIANS INSIDE THE GATES AND