Items related to The Darkness of the Present: Poetics, Anachronism,...

Steve McCaffery The Darkness of the Present: Poetics, Anachronism, and the Anomaly (Modern & Contemporary Poetics)

The Darkness of the Present: Poetics, Anachronism, and the Anomaly (Modern & Contemporary Poetics) 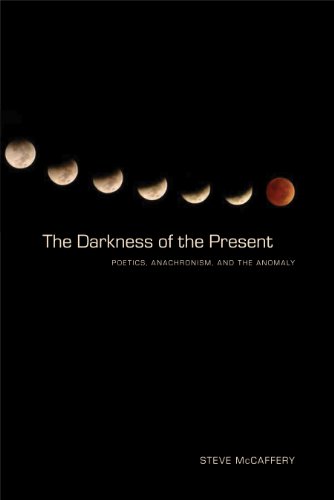 The Darkness of the Present includes essays that collectively investigate the roles of anomaly and anachronism as they work to unsettle commonplace notions of the 'contemporary' in the field of poetics. In the eleven essays of The Darkness of the Present, poet and critic Steve McCaffery argues that by approaching the past and the present as unified entities, the contemporary is made historical at the same time as the historical is made contemporary. McCaffery's writings work against the urge to classify works by placing them in standard literary periods or disciplinary partitions. Instead, McCaffery offers a variety of insights into unusual and ingenious affiliations between poetic works that may have previously seemed distinctive. He questions the usual associations of originality and precedence. In the process, he repositions many texts within genealogies separate from the ones to which they are traditionally assigned. The chapters in The Darkness of the Present might seem to present an eclectic fa\u00e7ade and can certainly be read independently. They are linked, however, by a common preoccupation reflected in the title of the book: the anomaly and the anachronism and the way their empirical emergence works to unsettle a steady notion of the 'contemporary' or 'new.'

"The consistent strength of this collection is the mercurial manner with which McCaffery wends his way among disparate topics, making illuminating connections between wide-ranging resources. The frequency with which one comes across improbable alliances generates much of the pleasure of this text."--Jed Rasula, author of The American Poetry Wax Museum: Reality Effects, 1940-1990, and Modernism and Poetic Inspiration: The Shadow Mouth

"This book raises important ethical/political issues for the practice of art in the twentieth century. The Darkness of the Present calls them to rigorous attention in a series of critical studies. It finishes in a deliberate move to stand back, in order to reflect on the issues from a cool critical vantage, like Tennyson's poet at the end of The Palace of Art."--Jerome McGann, author of Radiant Textuality: Literature after the World Wide Web and Are the Humanities Inconsequent?: Interpreting Marx's Riddle of the Dog

Steve McCaffery is the author of Prior to Meaning: The Protosemantic and Poetics and North of Intention: Critical Writings 1973-1986, and the coeditor of Imagining Language: An Anthology.

The Darkness of the Present Format: Paperback