Items related to Defining Russian Arts: From Diaghilev to Stalin, 1898-1934 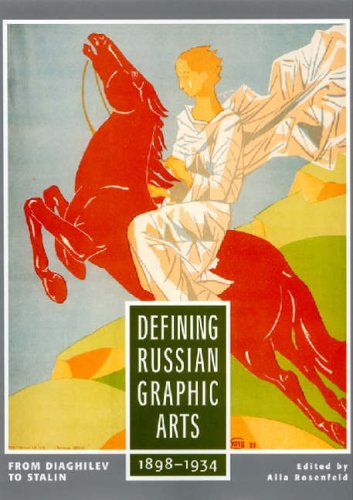 This volume explores the energy and innovation of Russian graphic arts during the period which began with the artistic creativity initiated by Serge Diaghilev at the end of the 19th century and which ended in the mid-1930s with Stalin's contol over the arts. It is a companion volume to the exhibition ""Defining Russian Graphic Arts: From Diaghilev to Stalin, 1898-1934"" to appear at the Jane Voorhees Zimmerli Museum at Rutgers University in March 1999. While there have been a number of American exhibitions of Russian art from this period, they have primarily featured the art of the Russian avant-garde of the 1910s and 1920s and concentrated on either paintings or costume and stage designs. This book endeavours to represent the development of Russian graphic arts during the forty years under consideration as a continuum, and to place the avant-garde in the context of the other major, but lesser-known, manifestations of early 20th-century Russian art. The book includes such diverse categories of graphic arts as ""lubki"" (popular prints), posters and book designs, journals, music sheets and ephemera. It features not only standard types of printed media and related studies and maquettes, but also a number of watercolour and gouache costume and stage designs. The stylistic affinities of these two particularly important genre of Russian graphic arts to the variety of printed media are pervasive and enhance one's understanding of the graphic oeuvre of specific artists, as well as relay the far-reaching effect of innovative design on Russian art, in general.

No Defining Russian Arts Read a customer review or write one .

Alla Rosenfeld is Curator of Russian and Soviet Nonconformist Art at the Jane Voorhees Zimmerli Art Museum at Rutgers University.