Items related to Sunbelt Capitalism: Phoenix and the Transformation...

Sunbelt Capitalism: Phoenix and the Transformation of American Politics (Politics and Culture in Modern America) 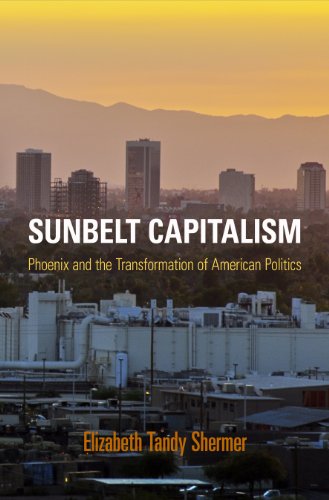 Few Sunbelt cities burned brighter or contributed more to the conservative movement than Phoenix. In 1910, eleven thousand people called Phoenix home; now, over four million reside in this metropolitan region. In Sunbelt Capitalism, Elizabeth Tandy Shermer tells the story of the city's expansion and its impact on the nation. The dramatic growth of Phoenix speaks not only to the character and history of the Sunbelt but also to the evolution in American capitalism that sustained it.

In the 1930s, Barry Goldwater and other members of the Phoenix Chamber of Commerce feared the influence of New Deal planners, small businessmen, and Arizona trade unionists. While Phoenix's business elite detested liberal policies, they were not hostile to government action per se. Goldwater and his contemporaries instead experimented with statecraft now deemed neoliberal. They embraced politics, policy, and federal funding to fashion a favorable "business climate," which relied on disenfranchising voters, weakening unions, repealing regulations, and shifting the tax burden onto homeowners and consumers. These efforts allied them with executives at the helm of the modern conservative movement, whose success partially hinged on relocating factories from the Steelbelt to the kind of free-enterprise oasis that Phoenix represented. But the city did not sprawl in a vacuum. All Sunbelt boosters used the same incentives to compete at a fever pitch for investment, and the resulting drain of jobs and capital from the industrial core forced Midwesterners and Northeasterners into the brawl. Eventually this "Second War Between the States" reoriented American politics toward the principle that the government and the citizenry should be working in the interest of business.

"Elizabeth Tandy Shermer's brilliant study of Phoenix shows how a group of young businessmen closed the liberal window of opportunity and then engineered dynamic growth free of the restraints of the New Deal state. Shermer traces the modern conservative revival in America back to the economic conservatism of Barry Goldwater and his fellow businessmen, not just to the racial and anticommunist groups that coalesced around his 1964 campaign or to the social and cultural tensions of the 1970s. This is the best study of the creation of the Sunbelt that we have."—Anthony J. Badger, author of FDR: The First Hundred Days

"The history of Phoenix allows Shermer to explore, with real nuance, the relationship of business interests with the liberal state, the shifting politics of urban boosterism, and the synergies between antistatist businessmen and the military-industrial complex that made their fortunes. Shermer researches deeply like a hedgehog but ranges widely like a fox, and her arguments are strengthened by comparisons with places as diverse as Southern California, Nevada, Tennessee, and Georgia. Even Rustbelt historians have much to learn in these pages."—Thomas J. Sugrue, University of Pennsylvania

"This richly documented and subtly argued book [is a] fresh perspective on modern U.S. politics."—William Link, Journal of American History

"With meticulous research, interregional comparisons, and stand-out prose, Shermer makes a convincing case for the centrality of the booster class to the conservative counterrevolution."—Bethany Moreton, Labor: Studies in Working-Class History of the Americas

"Sunbelt Capitalism, a local study of conservatism with sweeping ambitions, . . . has done the historiography a great service. In her telling, much of the Goldwater mythology is shed."—Robert Self, Reviews in American History

"Shermer's masterful guide to the political evolution of Phoenix is a classic work of urban and regional history. It is also guaranteed to generate a debate over her persuasive claim that the Arizona city, under the sway of Barry Goldwater's circle, gave birth to the economic formula we have come to know as neoliberalism. A remarkable achievement!"—Andrew Ross, author of Bird on Fire: Lessons from the World's Least Sustainable City

"A remarkably wide-ranging and masterful analysis of the political economy of the mid-twentieth-century United States."—Shane Hamilton, American Historical Review

"With its focus on local business elites, this study helps us understand postwar conservatism in a new way. Through Shermer's eyes, we see that the conservative political project is not simply 'antistatist,' and that the real struggle is over what government will do, not whether or not there will be government. Sunbelt Capitalism is a fascinating and compelling new book."—Kimberly Phillips-Fein, author of Invisible Hands: The Making of the Conservative Movement from the New Deal to Reagan

Elizabeth Tandy Shermer teaches history at Loyola University Chicago. She is coeditor (with Nelson Lichtenstein) of The Right and Labor in America: Politics, Ideology, and Imagination, which is also available from the University of Pennsylvania Press.

1. Sunbelt Capitalism: Phoenix and the Transformation of American Politics (Politics and Culture in Modern America)

2. Sunbelt Capitalism: Phoenix and the Transformation of American Politics (Politics and Culture in Modern America)

3. Sunbelt Capitalism: Phoenix and the Transformation of American Politics (Politics and Culture in Mod