Items related to Moby-Dick, or the Whale (Writings of Herman Melville):... 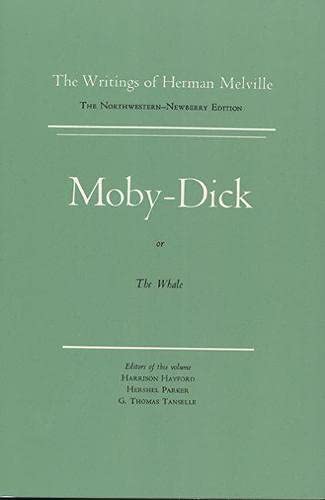 In Moby Dick Melville set out to write a "mighty book" on "a mighty theme." The editors of this critical text affirm that he succeeded. Nevertheless, their prolonged examination of the novel reveals textual flaws and anomalies that help to explain Melville's fears that his great work was in some ways a hash or a botch. A lengthy historical note also gives a fresh account of Melville's earlier literary career and his working conditions as he wrote; it also analyzes the book's contemporary reception and outlines how it finally achieved fame. Other sections review theories of the book's genesis, detail the circumstances of its publication, and present documents closely relating to the story. This scholarly edition is based on collations of both editions published during Melville's lifetime, it adopts 185 revisions and corrections from the English edition and incorporates 237 emendations by the series editors. This is an Approved Text of the Center for Editions of American Authors (Modern Language Association of America).

2. Moby-Dick: Or, The Whale (The Northwestern-Newberry Edition of the Writings of Herman Melville, Vol. 6)

3. Moby-Dick: Or, The Whale (The Northwestern-Newberry Edition of the Writings of Herman Melville, Vol. 6)

4. Moby-Dick: Or, The Whale (The Northwestern-Newberry Edition of the Writings of Herman Melville, Vol. 6)

6. Moby-Dick: Or, The Whale (The Northwestern-Newberry Edition of the Writings of Herman Melville, Vol.