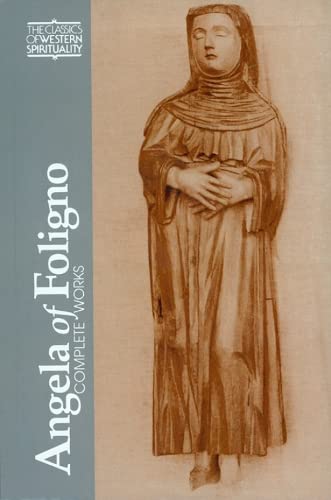 Angela of Foligno (c. 1248-1309) is one of the most outstanding representatives of the Franciscan and Christian mystical tradition. Her Book, published here in English for the first time, describes her passionate love affair with the ""suffering God-man,"" and her teachings in the form of letters and exhortations to her spiritual progeny.

Book Description Paulist Press International,U.S., United States, 1993. Paperback. Condition: New. Language: English. Brand new Book. The Classics of Western Spirituality (TM)series, which has inspired many less-successful imitations over the years, has fulfilled its promise and given us an invaluable resource of the soul.The Catholic Historical ReviewIn one series, the original writings of the universally acknowledged teachers of the Catholic, Protestant, Eastern Orthodox, Jewish and Islamic traditions have been critically selected, translated and introduced by internationally recognized scholars and spiritual leaders.ANGELA OF FOLIGNO-COMPLETE WORKStranslated, with an introduction by Paul Lachance, O.F.M.preface by Romana GuarnieriSuddenly, a divine word sounded in my soul: "My love for you has not been a hoax." These words struck me a mortal blow. For immediately the eyes of my soul were opened and I saw that what he had said was true. I saw his acts of love, everything that the Son of God had done, all that he had endured in life and in death-this suffering God-man-because of his inexpressible and visceral love. Seeing in him all the deeds of true love, I understood the perfect truth of what he had said, that "his love for me had not been a hoax," but that he had loved me with a most perfect and visceral love. I saw, on the other hand, the exact opposite in myself, because my love for him had never been anything but playing games, never true. Angela of Foligno (c. 1248-1309)"The superabundant one," "the saint of the double abyss," "the queen of the explorers of the beyond," "the one who lies," "the bedded, swooning saint," "the teacher of theologians"-thus have various commentators characterized the Blessed Angela of Foligno, one of the most outstanding, yet still too little known, representatives of the Franciscan and Christian mystical tradition.The dramatic story of Angela's passionate love affair with the "suffering God-man," how she is transformed and led into the deep abysses of the Trinitarian life, is recorded in the Memorial, the first part of her Book, which she dictated to her Franciscan scribe and confessor, Brother Arnaldo. The searing intensity of her account is unmatched in mystical literature.After her immersion in the fathomless depths of the Trinity, Angela emerged as a spiritual mother, gathering around her a network of disciples. The second part of her Book, the Instructions, contains her teachings in the form of letters and exhortations to her spiritual progeny, along with accounts of further visions and locutions, a testament, and an epilogue.This is the first translation into English of Angela's Book in its entirety. The translation is based on the new critical edition of the Latin text. A comprehensive introduction sets it in the context of the times, and summarizes Angela's inner journey, spirituality, and influence. Seller Inventory # AAC9780809133666

Book Description Paperback. Condition: New. Paperback. The most in-depth and scholarly panorama of Western spirituality ever attemptedIn one series, the original writings of the universally acknowledged teachers of the Catholic, Protestant, Ea.Shipping may be from multiple locations in the US or from the UK, depending on stock availability. 424 pages. 0.594. Seller Inventory # 9780809133666