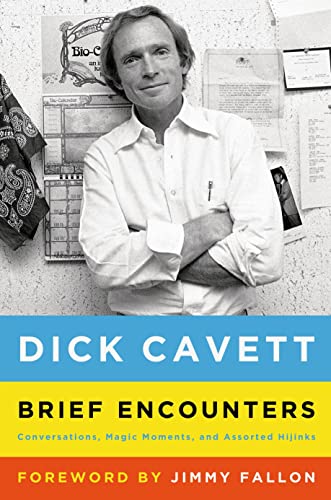 In Brief Encounters, the legendary talk show host Dick Cavett introduces us to the fascinating characters who have crossed his path, from James Gandolfini and John Lennon to Mel Brooks and Nora Ephron, enhancing our appreciation of their talent, their personalities, and their place in the pantheon. We tag along as Cavett spends an afternoon with Stan Laurel at his modest apartment in Los Angeles, spars with Muhammad Ali at his training camp, and comes to know a young Steve Jobs - who woos him to be Apple's first celebrity pitchman. He also offers piquant commentary on contemporary politics, the indignities of travel, the nature of comedy writing, and the utter improbability of being alive at all. On his talk show, Cavett welcomed the leading figures from film, music, theatre, literature, comedy, sports, and politics, and engaged them in conversation that made viewers feel that the discussion was taking place in their own living rooms. Jimmy Fallon, the new host of The Tonight Show, has called him a legend and an inspiration and has written a foreword that makes clear the debt that today's talk show hosts owe to Dick Cavett. Brief Encounters opens the door on how Cavett's mind works and what it is like to live in his world. To spend a few minutes, or an hour, or even a whole evening with Dick Cavett is an experience not to be missed, and now there's no reason to deny yourself. Settle in, and enjoy conversation!

The book is a delightful peek behind the curtain at celebrities, complex characters, and the nuances of everyday life--all told with his singular wit and style.--Publishers Weekly. The very model of a quick-witted interviewer, Cavett ... still works the crowd effectively.... [Cavett] remembers working as a gag writer for famed comedians and recalls the Broadway badinage and smart repartee that marked the well-regarded Dick Cavett Show.--Kirkus Reviews. In the late 1960s to mid-1970s the Dick Cavett Show was a late-night TV destination. [Cavett] was known as a literate, erudite interviewer who loved wordplay, but who didn't take any guff from his guests... Most notable are his anecdotal stories about such people as Groucho Marx, Nora Ephron, and Muhammad Ali.--Library Journal. The best bathroom reading ever written! Each story takes just the right amount of time. --Mel Brooks

Dick Cavett was the host of The Dick Cavett Show on ABC and PBS, and he also hosted talk shows on the USA, HBO, and CNBC cable networks. He appears frequently on stage, screen, and new media, and he was nominated for his most recent Emmy Award in 2012. He is the author of Talk Show and the coauthor of Cavett and Eye on Cavett, and he writes an online opinion column for The New York Times. He lives in New York City and Montauk, New York.