Items related to Walker's Primates of the World

Walker's Primates of the World 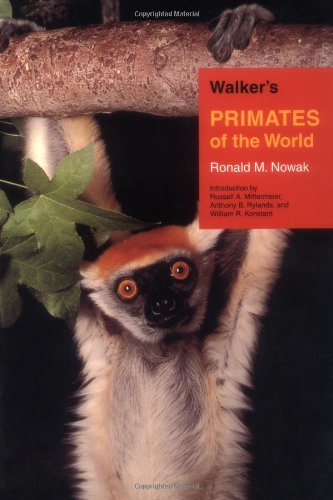 From Nigeria's needle-clawed bush baby to the snub-nosed langur of Tibet, from loris to lemur, from the woolly monkey to the "naked ape," primates are among the world's most diverse—and distinctive—groups of mammals. Seventy million years of evolving primate anatomy (much of it significantly influenced by a tree-dwelling lifestyle) has resulted in such defining characteristics as stereoscopic vision, a relatively large brain, grasping hands and feet, and superior levels of dexterity and muscular coordination.

Now Ronald M. Nowak offers a comprehensive guide to this fascinating and varied order of mammals. Walker's Primates of the World includes scientific and common names, the number and distribution of species, measurements and physical traits, habitat, daily and seasonal activity, population dynamics, home range, social life, reproduction, longevity, and status of threatened species. Recently extinct genera, such as the giant lemurs of Madagascar, are covered in full. Textual summaries present accurate, well-documented descriptions of the physical characteristics and living habits of primates in every part of the world.

In a new introduction, noted primate conservationists Russell A. Mittermeier, Anthony B. Rylands, and William R. Konstant discuss the taxonomy and distribution of primates as well as their distinguishing characteristics, special adaptations and particularly striking features, such as sociality. They also report on conservation efforts past and future, and assess the factors, largely human-caused, that are threatening non-human primates with extinction.

Professional naturalists will find [these volumes] invaluable as a handy reference, and amateurs—at least those citizens alive to their earthly environment—should delight in finding so much fascinating information made so available and palatable.

What an amazing lot mammals are, seen here in all of their diversity!... Walker has made available a mine of information, for the specialist as well as for the casually interested... If you want to find out about a mammal, then, here is the place to look.

Every mammalogist must have [these books], and those who profess a broad interest in the fauna of the world will want them.

In paperback, the primate section of the acclaimed Walker's Mammals of the World

1. Walker's Primates of the World

3. Walker's Primates of the World