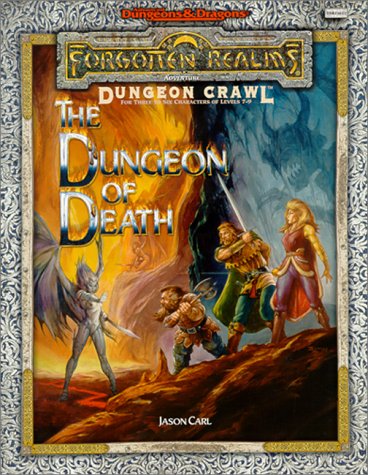 Cryptic rumours spread across the far North, sparking new interest in a shadow-haunted ruin. Although it was once a seat of ancient dwarven power, centuries of unspeakable evil have transformed this former gem mine into the demon-infested, trap-filled Dungeon of Death. Its name is well-deserved - unwary visitors fall victim either to the ravenous fiends that reside within the dungeon or to the insidious shadow curse that pervades the place. Inside lies a gruelling challenge of skill and courage that only the bravest and most experienced heroes will survive.

This stand-alone adventure is set within one of the most infamous dungeons of the Realms. It easily fits within an existing Forgotten Realms campaign, and it can also be incorporated into any other AD&D campaign world with minor modifications.

The Dungeon of Death: Who says there's no truth in advertising?