Items related to '78: How a Nation Lost the World Cup

Mccoll, Graham '78: How a Nation Lost the World Cup 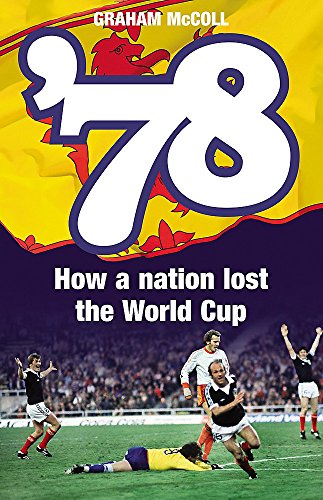 Against the backdrop of nationalism, devolution and North Sea oil, Scotland were the only British team to qualify for the 1978 World Cup, and set off with genuine hopes of returning champions. But it all went horribly wrong. Beaten by Peru, a country few could point to on a map, and drawing with Iran, Scotland faced Holland, needing to win by three goals. Incredibly, the Scots conjured up one of the greatest goals in World Cup history to give themselves a chance...but it wasn't to be. Throughout this entertaining account, the cast of characters stands out: manager Ally McLeod, more a friendly uncle than world-class strategist; the monstrously permed, part-time goalkeeper Alan Rough; and wide-boy Willie Johnstone, sent home after failing a drugs test. Yet despite the resounding failure and humiliation, Argentina '78 is still viewed with great affection. Perhaps for the last time, Scotland had a world-class team and after all, if you end up beating the runners-up, doesn't that mean you are the winners?

'written with the utmost tact and good humour, '78 is an enjoyable account of a painful episode' (The Scotsman)

'an enjoyably masochistic read that is full of pathos...this is worth the money for oldies, and also for young enthusiasts who need to be taught about the great perils of hubris' (Scotland on Sunday)

never again would Scotland be touted as potential World Cup winners, and this excellent book sheds new light on why it still haunts them 28 years later (FourFourTwo)

'this breezy and enjoyable account of Scottish football's equivalent of the Culloden massacre, with Ally cast in the role of the hopelessly misguided Bonnie Prince Charlie offers some plausible explantions as to why the 1978 team now has assumed a marketable kitsch value and inspire not a little misty-eyed reminsiscing among the less youthful followers of the national team' (When Saturday Comes)

Book Description Paperback. Condition: Fair. A readable copy of the book which may include some defects such as highlighting and notes. Cover and pages may be creased and show discolouration. Seller Inventory # GOR006340883

Book Description Paperback. Condition: Very Good. The book has been read, but is in excellent condition. Pages are intact and not marred by notes or highlighting. The spine remains undamaged. Seller Inventory # GOR001788464

Book Description Paperback. Condition: Good. The book has been read but remains in clean condition. All pages are intact and the cover is intact. Some minor wear to the spine. Seller Inventory # GOR003894793

Book Description Headline, 2008. Paperback. Condition: Very Good. A slight tan to page edges Very Good: a copy that has been read, but is in excellent condition. Pages are intact and not marred by notes or highlighting. The spine remains undamaged. Most items will be dispatched the same or the next working day. Seller Inventory # wbb0014931189