Items related to 'This is WAR!': The Diaries and Journalism... 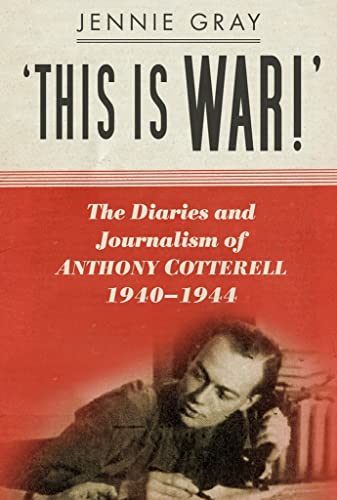 An official British Army journalist during the Second World War, Anthony Cotterell flew on bombing raids, sailed with merchant shipping convoys, and took part in the D-Day landings before he disappeared without trace in the aftermath of the Battle of Arnhem. This remarkable book includes many of his best reports - including his unforgettable account of the Normandy campaign - along with extracts from his caustically humorous diary, and many previously unpublished photographs.

Jennie Gray is a researcher and writer. She is the author of "Fire By Night, The Dramatic Story of One Pathfinder Crew and Black Thursday, 16/17 December 1943" and "Major Cotterell at Arnhem" and runs websites on the RAF, the Pathfinders, 97 Squadron and Anthony Cotterell.

Book Description The History Press Ltd, United Kingdom, 2013. Paperback. Condition: New. Language: English. Brand new Book. Anthony Cotterell wrote a unique form of war journalism - witty, sharp,engaging, and so vivid it was almost cinematic. As an official British Army journalist during the Second World War, he flew on bombing raids, sailed with merchant shipping convoys, crossed to France on D-Day, and took part in the Normandy Campaign. During this time he kept a diary, a hilarious and caustic record of his role in the war, a diary which abruptly ended after he vanished in mysterious circumstances after the battleof Arnhem bridge in 1944.Cotterell's diary and selected war journalism, illustrated with previously unpublished photographs, are presented together here to shed new light not only on the everyday life of the British Army in the Second World War but also on the role of the pressduring times of conflict. The quality of his writing is truly captivating and his account of the Normandy campaign is surely the nearest that a modern reader will ever get to experiencing what it was like to be in the thick of a Normandy tank battle. Seller Inventory # AA79780752493091

Book Description The History Press. Condition: New. Anthony Cotterell was a brilliant journalist, conscripted into the British Army in 1940. Here, his diary and selected war journalism are presented together to give a new insight into the life and work of the man who created a unique and vivid form of war reporting. Num Pages: 216 pages, 8 black & white plates, 16 black & white illustrations. BIC Classification: 1DBK; 3JJH; HBJD1; HBLW; HBWQ. Category: (G) General (US: Trade). Dimension: 159 x 234 x 17. Weight in Grams: 372. . 2013. Paperback. . . . . Books ship from the US and Ireland. Seller Inventory # V9780752493091